Gadgetsblog
HomeEntertainmentViola Davis on Commenting on Her Age, Family, and Awards at Jimmy's Live Show 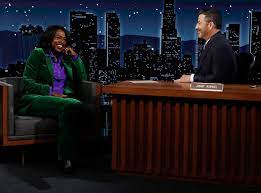 Viola Davis on Commenting on Her Age, Family, and Awards at Jimmy’s Live Show

In this show, the popular comedian Jimmy Kimmel conducts live sessions with political personalities and  A-list Hollywood celebrities and also welcomes artists to put on live musical performances. The first episode commenced on the 24th of January 2003. 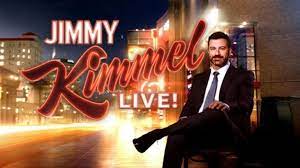 Recently on the 12th of April 2022, Viola Davis was on Jimmy Kimmel’s live show. Viola Davis is a great actress. She is an American actress and producer. Also, she has achieved numerous awards and she turns out to be the first Afro-American to be awarded the Triple crown of acting. Her acting skills were pouring out since she was a child.

As a child, she took part in many theater competitions. Viola Davis is quite an amazing actress. She was called on Jimmy Kimmel’s live show, for her new series First Lady, which is been streaming worldwide.  Jimmy Kimmel introduces her as one of the  25 greatest actors of the century.

Viola Davis was playing the role of Michelle Obama in the series First Lady. There she comes walking with confidence and spirit. Her walk depicts how confident and a great an actress she is. They both greet each other warmly, and then Jimmy Kimmel comments on the beautiful dress she wore.

To this Viola replies with humor saying that they made her wear that and luckily it fits here. At this Viola comments on her age, saying she is 56 and nothing fits her anymore. Commenting on her fitness she further added whole body becomes broad and bulgier. She sarcastically says she is been working out by just getting on the scale looking at it coming done and repeating the process quite often.

Viola also says how she was cooped up with the lockdown during the Covid pandemic. She talks about the frustrated zoom calls wherein she had to dress up and put her wig on. Later they converse about their last meeting was also on zoom before Christmas .

Jimmy throughs light on how her daughter who was just eleven asked for an iPhone for Christmas that year. To this Voila says she has an iPhone now, and she starts saying about the texts and stuff. She says she is been reading her daughter’s texts and messages as they share the same Apple ID.

Voila does not believes in privacy for her kids and so at three in the morning, she is reading her daughter’s text. She urges her to tell her but she cannot say her, as her daughter would know she has been her messages. So Viola would send her some quotes and affirmations on not to listen to certain girls and things they say.

Jimmy says that what happens when Viola’s friends send something weird, as it would as be viewed by her daughter. With humor, Viola says even if she sees that she can’t say anything as Viola pays for her phone. Later Viola says that her husband gave her daughter a rundown because of the all-green light cards.

A green light card is a little debit credit card used to teach children all about finances, and keep track of where the money is spent. So her husband knew where their daughter was spending the given money and her husband told her difficult it is to earn money and so they turned the yellow light to the green card.

Jimmy was quite surprised with where such a little munchkin spent the money and Voila says on Starbucks and shopping sites. A video on the first lady is been shown on the show and it emphasizes on marvelous acting of Viola Davis.

Jimmy comments on her way of speaking, and her walk and compares that it’s the same to Michelle Obama. Viola feels relieved as the shoot is over because everyone knows how Michelle Obama talks, how gracefully her movements are, and everything.

She feels frightened about getting cussed by Michelle on her acting. But it quite gets clear that Viola’s acting was amazing. Jimmy inquired on how she came up with the first three ladies and what was the reason for that, and in the future which further first ladies she would select. Jokingly Jimmy said that he would like to play Melania and how Trump would be annoyed by this.

Later Jimmy gives a brief about the awards Viola has won. She has won the screen actors guild. Also the OB Award for off-Broadway. Then she also won Harvard’s Hasty putting woman of the year.

She also got NAACP Award. Once she was also awarded the Tony Award. She was rewarded with Emmy Award and the Oscar Award too. After the awards discussion, they talked about their dog Bailey, whom they bought during the pandemic. The show ends here.

We can see that Viola Davis has set an example for everyone that if one wants to get success, you have no boundaries of gender, background, or anything.

Its been seen how graceful that woman has been on the show and has talked cheerfully with Jimmy. Also being an Afro-American she has a good number of awards which in itself is a good achievement.

FAMILY AND AGE OF VIOLA DAVIS?

Viola is 56 and she has a husband and daughter who is eleven.

WHAT VIOLA DAVIS IS KNOWN FOR?

Viola is an actress known for her award-winning performances in the tv series and film adaptations.

It is a reframing of American leadership through the lens of women at the heart of the white house.