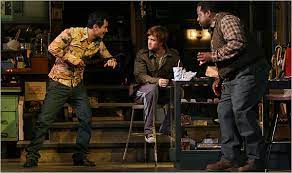 The American Buffalo is a play, written by David Mamet. The play had its premiere in production at Goodman Theater, Chicago. In 1977 it opened on Broadway. The plot of this play revolves around the burglary of a nickel coin and its planning. It deploys around how delusional a human can think of his friends and people around

IDEA ABOUT THE PLOT

The plot begins with the scene in a junkyard, which is owned by Don. The begins with the selling of a buffalo nickel. Don sells this at somewhat 90 dollars but now feels that he can get more out of it. He feels he has been fooled and so his gofer named Bob, plans to steal the coin back.

Bob says that he has been keeping a watch on the house and that the customer left the house on weekend with a suitcase. Teach who is so delusional about others persuades Don that Bob won’t be able to do this, and is not trustworthy for the burglary and purposes himself as a replacement for Bob.

This shows that Teach spreads false words about others. Don asks him to take Fletcher, who is their other poker buddy with him in the heist. But Teach being self-absorbed, says he can do it alone and how they can trust Fletcher who cheats in poker. Then Teach also insists on stealing the whole coin collection.

The next scene takes place at midnight when Teach and Don make final preparations to begin burglary just when Bob appears at the store. He attempts to sell the same buffalo nickel, which Don had sold earlier. Teach who couldn’t resist his nature, suspects that Bob and Fletcher made a plan to steal behind their backs.

Don asks where Fletcher was, to which Bob says he was mugged by some Mexican and was in the hospital. They inquire about some hospitals but couldn’t find any such registered name. But claims there must be a mistake regarding the same but Teach being suspicious hits him with metal. Just then he gets a call from a friend regarding Fletcher admitting to a broken jaw.

Later Bob says that he made up the story about the person leaving with a suitcase and bought the coin from the second coin dealer to keep Don motivated that he has not failed. Later Bob is taken to the hospital.

This shows how generous Bob was and how much he cared for Don. Whereas the opposite nature is possessed by Teach. It can be seen how easily Don gets influenced by others.

Here Sam Rockwell plays the role of Teach who speaks ill of others and the role of Don who is the owner junkyard is being played by Laurence Fishburne. Just then Rockwell enters who is an Oscar-winning actor and gives an amazing performance. It seems the performance of Darren Criss is less effective.

Teach’s character portrays how delusional his thinking is about his friends. Sam Rockwell’s ferocity was being shown. Later its seen that Laurence gave quite a good performance and how he feels about a petty insult and how he sold coins at a low rate. They then start planning a heist regarding the same.

American Buffalo hit the stage first in 1975 and it portrays grifters like Teach and how the audience reacted to that behavior without any sympathy. But if we look right now around people, we all have become Teach, one way or the other way.

Teach is considered a person predicting things from nowhere, and making assumptions with no facts. Right humans also have become such.

Bob who seems to have a concern about Don is a great guy. Are there any such guys left in today’s world, who would lie to motivate others? The answer is quite clear and you know it. This play envies the bad truths of human life and brings to light what humans are and what they have become.

We can learn a life lesson of not getting influenced by others. Humans always get easily import towards lie, without knowing the truth, just like Don. Teach is within us and we need to get rid of it. We must stop that behavior and be like Bob who motivates.