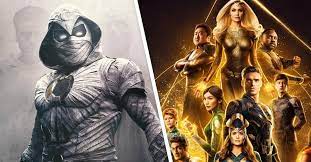 Moon Knight is a series that has appeared on Hotstar and deals with the investigation of Egyptian gods, inside the same body. It is again a marvel studios production, and we all know that Marvel movies are all about animation rather than reality.

So the first season of Moon Knight is out on Disney + Hotstar. And it is an amazing series to watch. Marvel production is always best only. And series and movies launched by them are always worth watching and there is nothing bad to say when it comes to marvel studios.

The new series, Moon Knight is shining in the Marvel Cinematic Universe. Also one of the shocking news is that all the stars in the series have not been in any of the marvel movies. The stars Marc Spector, Steven Grant, and Moon Knight have not appeared on the screen either as a superhero or as a villain.

Usually, marvel movies consist of stars from their previous movies or series. But particularly in this one producer is working with completely a new crew. It has also been heard from the head writer and executive producer, Jeremy Slater that they will include some of the previous stars from the Marvel Cinematic Universe.

The head writer, Jermey Slater also specified that they will collect this crew from the Eternals. He says that he wants to include Kumail Nanjiani from eternal because he worked with him and his buddies with him. And we also saw a mashup of Avtar and the Eternals. That was amazing to watch.

But the head writer says that merging Eternals with Moon knight is going to be a bit difficult. This is because of the ancient Eygpt set. This also could turn into a massive expensive concept. The head writer has tried to get three to four eternal onset of Moon Knight.

The Head writer also believes that it would be a fun scene and the audience would surely love it. So this mashup of eternal and the moon knight would surely be amazing. With will happen when an ancient Khonshu avtar with four Eternals are side by side with Kaiju sized crocodile god. This surely will be a memorable cross-over of the times.

Kingo would join the crossover along with Don Lee’s Gilgamesh and Lauren Ridloff’s Makkari. Ikaris and Thena who would be played by Richard Madden and Angelina Jolie would not be taking part, because of the expense also their time schedules. This crossover would be the best one for marvel.

So this one crossover between Moon Knight and Eternals would be amazing and will increase the fan base of the series. The audience was excited after seeing the cameo of the mashup. All the fans were eagerly waiting for this crossover. But the head writer had to cut the cameo because of budget reasons.

The head writer tried hard to bring the guy on the stage but it was better for everyone. They had plenty of time where they could do this clubbing between them and everyone agreed on this part.