In Poland, a drunk man jumps in to a confined area in a zoo, and attacks a bear in front of every vistor…

ARE ANIMALS NOT EVEN SAFE IN THE ZOO? During the coronavirus epidemic, it is very common to hear news about someone passing away due to the virus, or even celebrity controversies and statements made by … 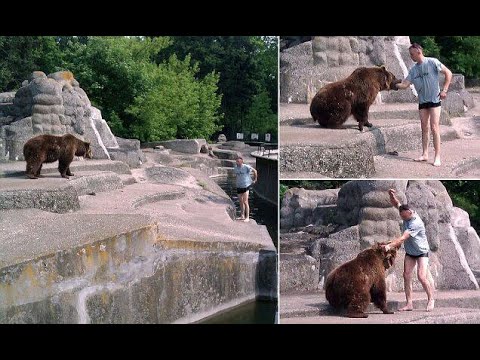 ARE ANIMALS NOT EVEN SAFE IN THE ZOO?

During the coronavirus epidemic, it is very common to hear news about someone passing away due to the virus, or even celebrity controversies and statements made by them. But one of the most unpredictable and saddening headlines is the one mentioned in this article. In a polish zoo, a man who was under the influence of alcohol broke into the bear exhibit and jumped into the water habitat of the bear. As soon as the bear approached him, the man pushed the animal’s face into the water so that she could drown, but the officials made sure that the bear was rescued.

It is said that the bear concerned in this situation is named: Sabina. The animal had been rescued from a circus long time back and was taken to the zoo, where she is currently taken care of. You will turn sad hearing that Sabina has been attacked many times in the past too. The whole incident was filmed on a camera and made viral, and the judicial institutions will take a stand against the event and will make sure that the 23-year-old man is punished. The animal offense is a huge crime and should not be taken lightly in any way. We really hope that the bear leads a safe and healthy life in the future that holds for her.

Luckily nothing physically intense was harmful to the bear. However, she was mentally quite stressed, and the incident might have been a traumatic incident for the animal. It was good that the zoo officials arrived on time and saved the bear from falling sick or even dying – which was highly possible.

The zoo authority has finalized to take action against the so-called “visitor,” more of an intruder, though. It will be a good lesson for the other zoos to learn from, as even they must have increased their security, but the countries and regions with lockdowns will not really face the problem as visitors are house-arrested. But the Polish authority will take a stand against this, and the matter will be further revealed.

Jazz Statement on the Passing of Jerry Sloan, a tragic and unexpected death.