Hai To Gensou No Grimgar, better known as Grimgar of Fantasy and Ash, is an anime television series based on a Japanese novel. A manga was also developed about the same. Known for its nicely … 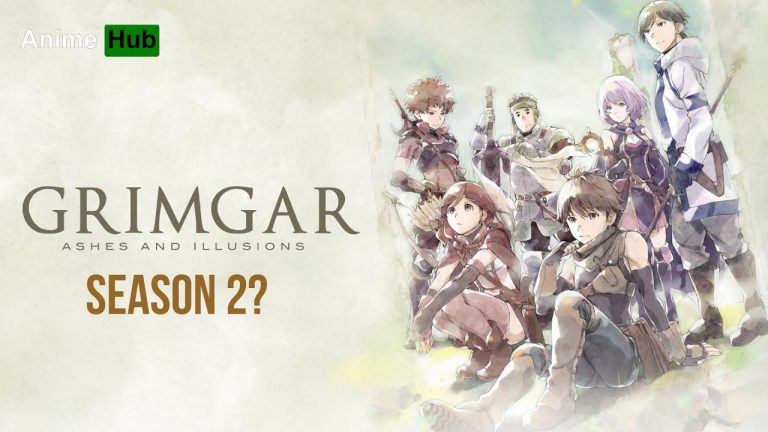 Hai To Gensou No Grimgar Season 2

Hai To Gensou No Grimgar is an anime show produced by A1 Pictures studio and directed by Ryosuke Nakamura. There were a total of 12 episodes in season 1 and it debuted the first episode in March 2016. It was broadcasted on television networks like AT-X, Tokyo MX, BS11,  and ABC from January 11, 2016- March 28, 2016. Later it became available online. However, it is not available on Netflix as of now.

Hai To Gensou No Grimgar Season 2 is about a group of people who somehow land up in a fantasy world but they remember nothing about their past life and who they were before the island incident. The group has Manto, Haruhiro, Ranta, Moguzo, Yume, Shihoru, Merry, and Kuzaku as main characters. They were probably from the modern world try their best to survive by fighting goblins in a forest. As they have no clue what to do next they get enrolled into service by a mysterious person named Chief Britney as Trainee Volunteer Soldiers. They fight, work hard to earn food and also think of ways to recollect and find out how they were sent to that world.

Hai To Gensou No Grimgar shows the characters having a lot of flashbacks of airplanes, cellphones, and things like that pointing towards the fact that they might have been transported. A guy called Manto was the leader of the group. They began hunting together.

In the initial days, they faced a lot of hurdles and things do not go smoothly as they had never faced such monsters. But over time they become more like a team and work together to help each other survive by expertise in surviving skills. They manage to go to a ruined city from the forest where their leader dies while saving others and passes on the responsibilities to the thief Haruhiro.

The group mourns the death of Manto as they realize his worth and his sacrifices to bind them all together. Then there is an addition of a priest called Merry in the group. She takes some time to get over the destruction of her group of friends for which she blames herself.

Although she remains distant from the group, they become her friends with time. They seek to take revenge for Manto’s death after getting back to strength. The party plans to strike through the heart of the goblin encampment in the ruins.

Whether or not they defeat the goblin king and what happens to the members and their memories is for you to watch(Yes, no spoilers here!). Hai To Gensou No Grimgar is a fantasy-based adventurous anime show which keeps you at the edge of your seat the entire time. It teaches life lessons like teamwork, trust, survival skills in the worst possible conditions, and possibly humanity.

WILL THERE BE HAI TO GENS OU NO GRIMGAR SEASON 2

The ending of season 1 was not a cliffhanger as such but there can be further seasons as it was more of an open ending. The fans can still hope for an Hai To Gensou No Grimgar Season 2 as many anime shows have a 5-6 years gap between two seasons.

Just like Netflix, if fans and the audience really want Hai To Gensou No Grimgar Season 2 they can raise their voice politely on social media, and who knows, one day anime studio members and directors might listen to them and make more seasons! One can hope for the best right?

FAQS ABOUT HAI TO GENS OU NO GRIMGAR SEASON 2:

Will there be an Hai To Gensou No Grimgar Season 2?

While the show has received good reviews, the second season of Grimgar Of Fantasy And Ash hasn’t been officially confirmed yet. Sadly, there are many examples of anime series that last one season, only for the fate of a second series to be left in limbo for years.

Who is the strongest in Hai to Gensou no Grimgar?

Mako, Kikuno, and Azusa are the strongest combatants after Kajiko as they were the only members Kajiko told to stay and fight the Orc warlord Zoran Zhu. The rest she told to retreat.

Is Grimgar an Isekai?

10 Overlooked: Grimgar Of Fantasy And Ash
But the premise of watching dimension-hopping travelers struggle to defeat a single goblin is so much more realistic than any other Isekai anime. There’s a lot of hidden charm in this show, in both moral conundrums and character interactions, so try and give it a shot.
Read more articles about:

What Happened To Allysa Swilley? Why Was She In The News? Get To Know More This Zoologist

If Loving You Is Wrong Season 5 Has Been Renewed? Confirmed? Has It Been Released, Get All Exciting Details About The Plot| Cast| Trailer| Reviews and Everything!!