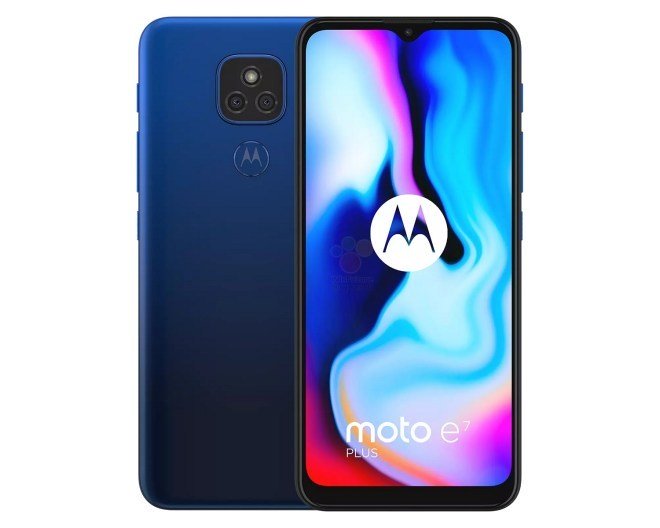 The Motorola Moto E7 Plus is a new budget smartphone from the Lenovo-owned company. The phone was expected to launch today but Motorola skipped its announcement. Nevertheless, its specs and price have been published on the web.

The Moto E7 Plus has a 6.5-inch LCD display with a 1600 x 720 resolution and a waterdrop notch at the top for the selfie camera. Just as we have seen on a number of budget mid-range phones announced in the past few weeks, this also features a Snapdragon 460 processor according to the German blog, Winfuture, and it is paired with 4GB of RAM and 64GB of storage. If you need more storage, there is a MicroSD card slot available.

There are two cameras on the back of the Moto E7 Plus and they are housed in a square housing with rounded corners along with an LED flash that sits above the sensors. The primary camera is a 48MP sensor with an f/1.7 aperture and it is paired with a 2MP depth sensor. Up in front is an 8MP selfie camera with an f/2.2 aperture.

The Moto E7 Plus has a 5000mAh battery which is sort of the standard battery capacity for mid-range phones these days. Unfortunately, while you should get up to 2 days of usage, you will not be able to quickly top up the battery when you are running low as the phone only supports 10W charging. Another letdown is that it has a MicroUSB port.

The phone has its SIM tray on the left side and has support for Dual SIM. There is also an audio jack at the top of the phone. The Moto E7 Plus ships with Android 10 out of the box with Motorola’s My UX interface and Moto Actions.

UP NEXT: Google Play Console reveals Moto G9 Plus has a Snapdragon 730(G) processor