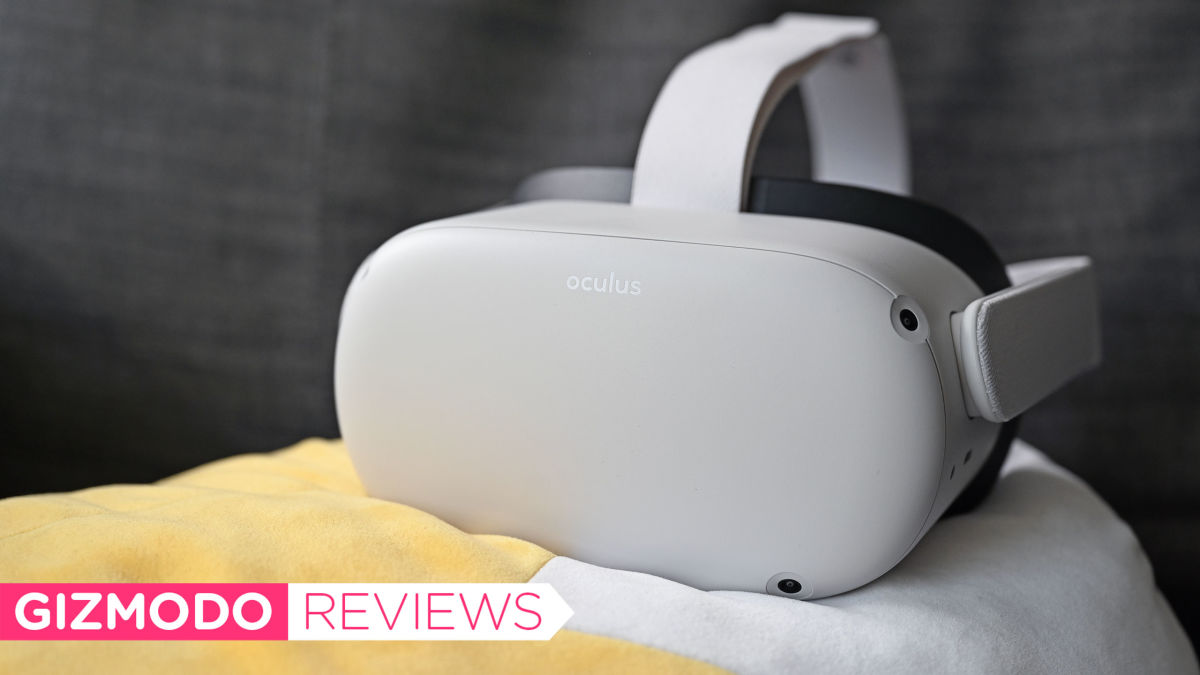 The Real Deal VR Headset for Everyone

I tried the Virtual Boy more than 20 years ago and was almost instantly disappointed, but I’ve still dreamed of having a simple, standalone VR headset that could transport me to other worlds at a moment’s notice. And while the original Oculus Quest was a valiant attempt to make that dream come true, I never really felt like it had the specs or the optics to fully satisfy that desire.

The new Oculus Quest 2 is an entirely different device. Not only is it significantly more powerful, but it also sports a streamlined, more comfortable design, with improved audio, much better visuals, and even the ability to play Rift desktop VR content too. The Quest 2 is precisely the VR headset I’ve been waiting for more than two decades. Actually, it’s not just for me, it’s the VR headset for everyone, because most importantly, starting at just $300, the Oculus 2 costs $100 less than the device it’s replacing. The Quest 2 isn’t just an iterative update, it’s a real turning point for modern VR.

A little light peaks in from beneath shroud around the nose, requires a Facebook account to login to the Oculus Store, base model’s 64GB of storage is a bit small

From a hardware perspective, the Quest 2 offers two major upgrades: improved performance due to Qualcomm’s XR2 VR platform and completely redesigned optics. Compared to the Snapdragon 835 chip used in the original Quest (which was already a year old upon Quest’s release), Qualcomm’s XR2 (which is based on the Snapdragon 865) delivers three generation’s worth of improvements, which is something you can feel regardless of if your playing games, downloading new apps, or just navigating through menus. Oculus has almost completely eliminated any of the sluggishness you sometimes encountered on the first Quest, resulting in a headset that feels snappy and responsive all the time.

As for its display and lenses, the Quest 2 features a 90Hz fast-switch LCD display that delivers a 1832 x 1920 resolution to each eye. That’s more pixels and a faster refresh rate than you get from both the original Quest and PC-based Rift S, which is crucial because with Oculus having already announced that the Quest is being discontinued and that the Rift S will be sunsetted in 2021, the Quest 2 will be Oculus’ primary VR headset for both standalone and desktop content going forward.

The Quest 2 features three settings for interpupillary distance (the distance between the lenses) which Oculus should work for 95% of people, which you can adjust by simply moving the lenses left and right. Photo: Sam Rutherford/Gizmodo

So while I admit I would always love more resolution and less aliasing in VR (which are those little jaggies you sometimes see on diagonal lines), for a VR headset that starts at just $300, the Quest 2’s visual quality is fantastic. And most importantly, unlike more expensive VR goggles from HTC or Valve, unless you are tethered to a PC for playing desktop Rift games, the Quest 2 is totally wire-free, so there aren’t any cords threatening to trip you up. Even the Quest 2’s Touch controllers have gotten an upgrade to be more like the Rift S’s controllers, offering increased comfort and better haptic feedback, i along with the usual assortment of multiple face buttons, triggers, and limited gesture recognition.

And while it’s still technically an experimental option like the Quest and Quest 2’s hand-tracking, I really appreciate the new Passthrough+ feature on the Quest 2, which allows you to tap twice on the side of the headset instantly switching from VR to seeing meatspace using the Quest 2’s external cameras—all without having to actually take the headset off. This makes it so much easier to pop out anytime real life gets in the way of your VR adventures, and helps prevent smudging the Quest’s lens with oil from your forehead if you were to lift the headset halfway off your face.

One small thing I did notice is that sometimes when I was playing a VR game in stationary mode if I fully extended my arms, I would hit the edge of the Guardian, the system designed to keep you from running into doors and walls. This caused Oculus’ boundary lines to pop up unnecessarily. Thankfully you can adjust it, and with the Quest 2’s roomscale Guardian set up being as simple as putting one controller on the floor (which you often don’t need thanks to the Quest 2 having the ability to automatically determine ground level) and drawing your own self-defined border with the other controller, full VR freedom (at least in one room) is a cinch.

The Quest 2’s design has also been simplified and streamlined, with the 17.75-ounce Quest 2 actually being 10% lighter than the original. And when you combine those weight savings with more comfortable foam padding, you get something that’s so much less tiring to wear—particularity during longer VR expeditions. I also want to call out the Quest 2’s flexible head straps. Not only are they super easy to adjust, they’re thin enough to allow you to wear the Quest 2 comfortably while lying down in bed, which sounds silly, but is something I really enjoy even if I’m just the Quest 2 to watch a movie or YouTube video in VR. It’s like having a giant movie theater-sized screen all to yourself, though I do have to say this is also when you notice that the Quest 2’s resolution still isn’t as good as watching something on your TV or phone.

Click through for more photos of the Quest 2. Photo: Sam Rutherford/Gizmodo

The Quest 2’s volume rocker is on the bottom of the headset. Photo: Sam Rutherford/Gizmodo

AdvertisementYou can skip ad after 1 second

You can go to the next slide after 1 second

Another huge improvement on the Quest 2 is its audio, which comes from small speaker slits on the inside of the headband. They don’t look like much, but thanks to improved support for spatial audio on the XR2 chip, the Quest 2 does a surprisingly good job of pumping out 3D sound that adjusts dynamically to the content and your head position. Spatial sound is one of those things that you don’t really appreciate until it’s not there, but when it comes to VR, it adds a lot to immersion. Of course, if you want to plug in a pair of wired cans, the Quest 2 also has a good ‘ole headphone jack.

My only real complaint about the Quest 2’s design is, that at least on my head, there’s a small gap between the bottom of the headset and the bridge of my nose that lets light in from the outside, which isn’t ideal when you’re trying to dive into VR and escape the nightmare that is 2020. And while Oculus does provide an optional Fit Pack for $40 that comes with a pair of light blockers and face pads for people with wider or narrower faces, I kind of wish I didn’t need any extras just to fully black out the outside world.

Screenshots will never do VR justice, but let’s say its a lot harder to turn down the dark side when a large Sith lord is threatening you with a lightsaber. Screenshot: LucasFilms

YouTube, Prime Video, and other video services already have apps that let you watch movies and shows in VR. Screenshot: Blizzard

The Oculus Store interface couldn’t be easier to use. I’d almost say its a bit too simple. Screenshot: Oculus

But OK, enough about the headset, because honestly, the Quest 2’s biggest achievement is how easily it lets you experience a huge range of content. The Oculus Home UI provides a no-nonsense way to find new apps, and with the Quest 2 being compatible with all current Quest titles and Rift desktop, there’s just so much to do. And regardless of whether it’s being used standalone or tethered to a PC using a USB-C cable and Oculus Link, the Quest 2 handles almost everything you throw at it with aplomb.

Old VR standbys like Beat Saber and Superhot on the Quest 2 are just as engaging as they are on headsets twice its price, while newer titles like Population: One bring fast-paced Fortnite-style shooting and gameplay into VR. And there’s nothing like the reflexive tremble I experienced when a life-size dark lord of the Sith emerged from the shadows in Vader Immortal. The Quest 2’s 90Hz refresh rate is especially critical. Thanks to it I experienced almost none of the movement induced nausea that plagues so many VR experiences.

The Quest 2 provides the tech and experience I hoped the Virtual Boy would deliver all those years ago, and while I would always appreciate a bit more sharpness from its optics (or the option to not use my Facebook account when signing into the Oculus Store), the Quest 2 is making that virtual dream a reality.

Back in 2016, the HTC Vive and the Oculus Rift proved that the virtual worlds sci-fi had long promised was within our reach. And now, the Quest 2 is bringing a taste of that to everyone in a package that’s affordable and easy to use. For anyone who’s been curious about VR but has been put off by the price, the Quest 2 is the answer and it’s the best place to start.

The Quest 2 is compatible with all previous Quest games and can also be used to play Oculus Rift games headset on desktop via a USB-C cable and Oculus Link. Battery life lasts around two to two and a half hours depending on what you’re doing, while the controllers are powered by a single AA battery each.Oculus does provide IPD adjustment on the Quest 2, but unlike some other headsets, you only get three set distances instead of a more granular adjustment wheel.The Quest 2 comes with a USB-C cable and power adapter, two controllers, and a spacer insert for people who wear glasses.The Oculus Rift S is going to be discontinued in 2021, which means the Quest 2 will be Oculus’ primary VR headset for both standalone and desktop environments.Pre-orders start today, with official shipments slated for Oct. 13. Optional accessories for the Quest 2 include an official Link cable ($80), a carrying case ($50), the more substantial Elite Strap ($50), a bundle containing the Elite Strap with an extended battery and a carrying case ($130), and a Fit Pack ($340), which contains extra light blockers and additional foam pads designed for people with wider or narrower faces.