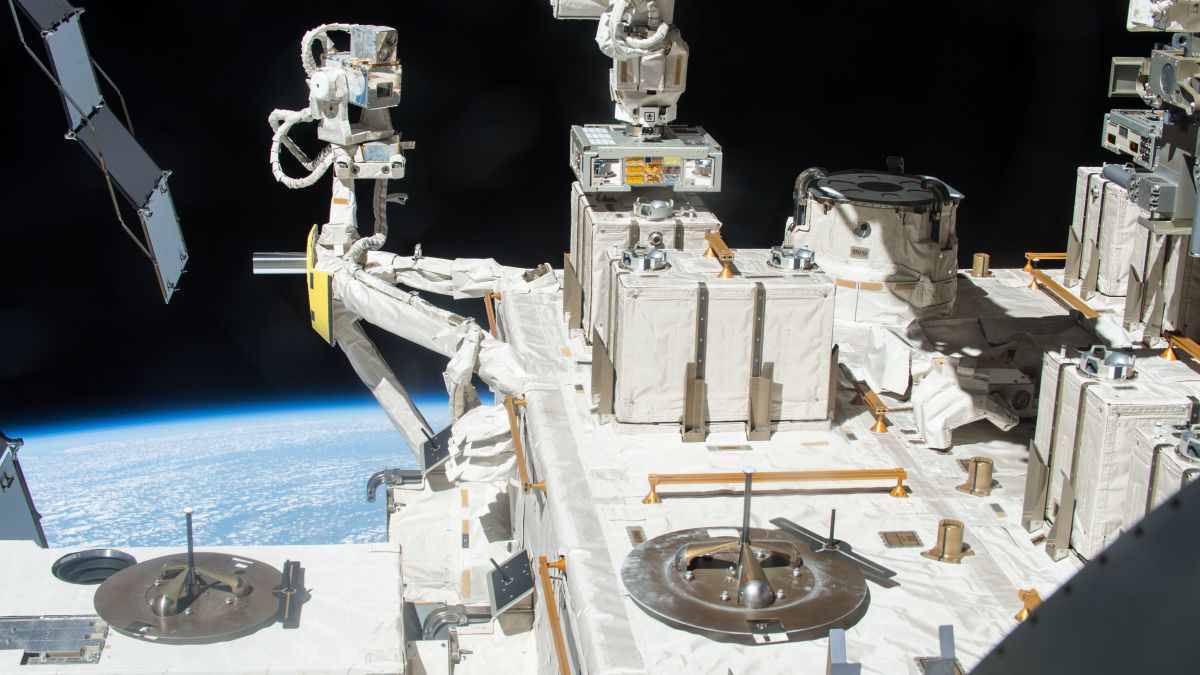 The Kibo portion of the ISS, where the three-year experiment took place. Image: JAXA/NASA

A hardy species of bacteria can survive the harsh conditions of space for prolonged periods, but only after forming a thick, congealed clump, according to new research. The discovery could bolster the panspermia hypothesis: the idea that asteroids seeded life on Earth.

Deinococcus radiodurans is an extremophile microbe capable of surviving freezing cold temperatures, ionizing radiation, ultraviolet light, and dehydration. And as new research published today in Frontiers in Microbiology shows, this bacterium can also survive the harsh conditions of outer space.

Dried out samples of Deinococcus were brought back to life after spending over three years on a panel outside the International Space Station. But here’s the thing—the surviving bacteria had previously formed as a thick clump, or aggregate, in the parlance of the researchers, led by Akihiko Yamagishi, a professor from Tokyo University.

The new finding suggests certain bacteria, when gathered together into a mass, have what it takes to make long journeys through space. Accordingly, Yamagishi and his colleagues say this boosts the panspermia hypothesis, in which microbial life can take root on an alien planet. The new research also speaks to a potential panspermia scenario involving Earth and Mars, in which either planet could have seeded the other (though to be fair, we still don’t know if Mars was ever habitable).

Back in 2008, Yamagishi and his colleagues used aircraft and balloons to detect and document microbes floating in the upper atmosphere. Naturally, samples of Deinococcus radiodurans—a microbe Guinness World Records lists as the most radiation-resistant lifeform—were found at altitudes reaching 7.5 miles (12 km) above the Earth’s surface. With this bacterium confirmed in our planet’s upper troposphere, Yamagishi sought to learn how it might fare in the harsh environment of space.

The team’s experimental design involved the samples being exposed to space for one-, two-, and three-year durations while resting on an exposure experiment module outside the International Space Station.

This allowed the researchers to develop a survival curve and to estimate the survival abilities of the bacteria over a longer period of time, explained Yamagishi in an email. Bacterial aggregates of varying thickness were exposed to space. The experiment, performed from 2015 to 2018, was done atop Kibo, the Japanese Experimental Module on the ISS.

Results showed that all clumps thicker than 0.5 millimeters partially survived the three-year exposure to space. Bacteria located along the outer surfaces of the aggregates were killed, but this created a kind of protective crust for the dehydrated microbes underneath, according to the research.

After extrapolating the survival data for all three sample groups, the scientists predicted that batches thicker than 1 mm in diameter could have survived for a total of eight years in outer space and that even thicker aggregates would have survived anywhere from 15 to 45 years.

When asked how Deinococcus radiodurans is able to survive such harsh conditions, Yamagishi said it’s because “they have multiple copies of genomes and a heightened ability to repair damage done to DNA,” which they did once they were rehydrated.

The new findings provide the best estimate yet of bacterial survival in space, though for a known extremophile. It shows that certain bacteria, when properly shielded, can survive long stints in outer space. This shielding could take on the form of aggregates or even burial inside a rock.

The finding prompted Yamagishi to coin a new term: massaspermia.

“‘Massa’ stands for the word mass, or aggregates, thus ‘massapanspermia’ is the hypothesis that the microbial aggregates may be transferred between planets,” he said.

The new research is exciting, but plenty of work is needed to further strengthen the panspermia and now massapanspermia hypotheses. Theoretically, microbes could last long enough to make the trek to Mars, but that claim comes with some qualifications.

“The average time required for objects to transfer between Mars and Earth is around tens of million years,” explained Yamagishi. “However, in the shortest orbit it takes only months or years, though the frequency is very low.”

So while it’s possible for hitchhiking microbes to make a quick journey to Mars, it’s on the low scale of probability. And while extremophile microbes might survive upwards of 45 years in space, it’s an open question as to whether they could last for millions of years, which would most certainly be the case for interstellar journeys and protracted trips to Mars.

Things get even more complicated when considering other factors, such as the ability of microbes to survive a jarring journey into space (likely from an asteroid impact), heated entry through the atmosphere of an alien planet, and impact with the alien surface.

Panspermia is a nice idea, but a lot of things have to happen for it to actually work. Should we ever prove it to be true, however, it means life is far more prevalent in the universe than we could have ever imagined.