FBI, USAF Investigating if Military Helicopter Shot at in Virginia Was Targeted or Hit by Random Gunfire

A UH-1N Huey helicopter taking off from Columbus Air Force Base in Mississippi in 2005.Photo: U.S. Air Force photo by Staff Sgt. Joe Laws (Fair Use) Someone opened fire on a U.S. Air Force UH-1N … 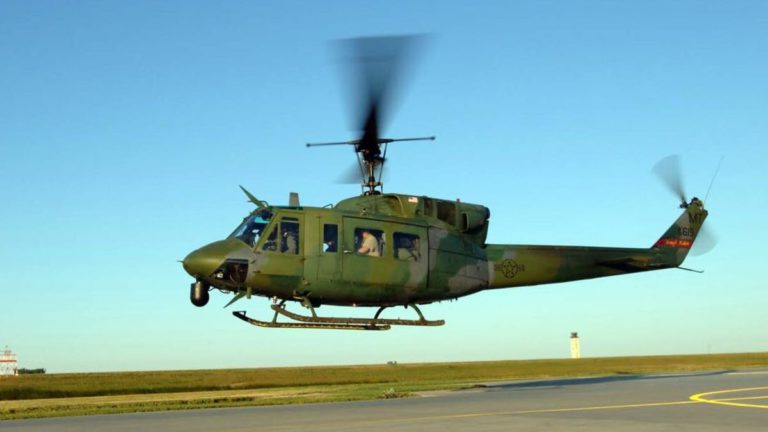 A UH-1N Huey helicopter taking off from Columbus Air Force Base in Mississippi in 2005.Photo: U.S. Air Force photo by Staff Sgt. Joe Laws (Fair Use)

Someone opened fire on a U.S. Air Force UH-1N Huey helicopter while it was flying in Virginia around noon on Monday, injuring one of the two pilots on board, an Air Force official told CNN on Wednesday.

Per CNN, the Air Force and the FBI are looking for the shooter and attempting to determine whether the hit was deliberate or—in a crystal clear example of why firing a gun randomly into the air is one of the most reckless things you can do—the incident was the result of someone firing a gun randomly into the air. USAF spokesperson 2nd Lt. Myron E. McRae told the New York Times the helicopter was flying about 10 miles northwest of Manassas Regional Airport at a height of 1,000 feet when it was struck by a bullet.

Pilots called in a “medical emergency” to air traffic controllers. According to McClatchy DC, Manassas Regional Airport operations officer Richard Allabaugh said the airport was notified around 12:20 p.m. that a helicopter would be making an emergency landing there and paramedics were inbound.

One pilot reportedly was treated for injuries that were not life threatening, though it was unclear whether they were actually struck by the bullet. According to the Times, the FBI didn’t elaborate on the exact nature of the projectile that struck the helicopter or how much damage occurred.

What is known is that the Huey was part of the 1st Helicopter Squadron based at Andrews Air Force Base, Maryland, which provides airlift services to foreign dignitaries, highly ranked Executive branch personnel, and other VIPs and sometimes participates in search-and-rescue missions.

In a statement to CNN, the Air Force 316th wing only confirmed that an incident had occurred and that Office of Special Investigations personnel are working with the FBI. The FBI Washington Field Office told the network it had dispatched “Special Agents and its Evidence Response Team” to the Manassas airport at around noon on Monday and urged anyone with information to get in contact.

Jaden Smith hides from the cameras following his Mom Jada’s Revelations that she cheated on Hubby Will Smith, Here are the Updates –