Gadgetsblog
HomeGameThe Legend of Zelda: Breathe of the wild 2 to be launched in Nintendo switch. Watch the trailer, Release date and more

The Legend of Zelda: Breathe of the wild 2 to be launched in Nintendo switch. Watch the trailer, Release date and more

The Legend of Zelda: Breathe of the wild 2 is definitely the most anticipated game of the future for a number of people. The sequel to The Legend of Zelda, an extremely fun, enjoyable and iconic game is being developed. As of now, quite little is known about it.

Let’s have a look at the Trailer:

Here’s everything we know so far!

The trailer gives us a lot of hints. It features Link and Zelda travelling in a dark dungeon beneath Hyrule with a torch. Spirit-like tentacles rise around the musty tomb they are exploring. Both of them are riding a large elephant-like beast. With a shock, the trailer cuts down to tentacles creeping down. This might be a hint to the return of Ganondorf, just might be.

The video then cuts to a Hyrule castle at a distance and shows us the Hyrule fields. The castle is seen to be covered with dust and there the Trailer ends. The trailer finishes with a message which states, “The sequel to Legend of Zelda: Breath of the Wild is in development.”
It is not usually expected to have this great level of animation in the phase of development but this can be understood with Nintendo already having the prequel to help. 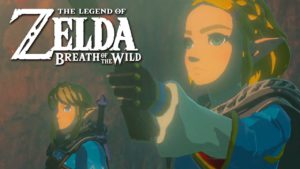 The Legend of Zelda: Breathe of the wild 2 was initially set to release on Nintendo Wii U over a year ago. In the presentation by Nintendo in their E3 2019 they release an interestingly brief and tangling trailer. This announced the game to be introduced for Nintendo Switch. The release is not confirmed by Nintendo yet which is quite an expected move looking at their average time to launch a new game. The current Nintendo Switch life is till October 2022 to March 2023. Looking at the trend it is expected that the “Legend of Zelda: Breathe of the wild 2” might release on Nintendo Switch somewhere between October and December this year.

But, this might also be delayed due to the current lockdown situation in many countries worldwide because of the pandemic. This will also halt the distribution of physical copies of the game. Also, it might help Nintendo in rivalling their competitors PS5 and Xbox X series which are also set to launch new games during the same period. All we can do is hope for a sooner than later release and getting to play the most anticipated video game.