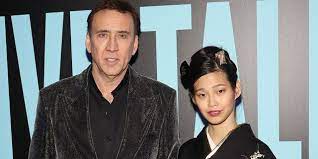 All Hollywood fans must be aware of the famous actor Nicolas Cage. Nicolas Kim Coppola was born in 1964 on the 7th of January. He has received various awards including Academy Awards, a Screen Actors Guild Award, and a Golden Globe Award.

On Thursday Nicolas Cage appeared on The Kelly Clarkson Show. On his appearance there he said he had something big to announce. Cage revealed that he and his wife, Riko Shibata, are expecting their first child together. They also mentioned that they are expecting a baby girl.

Nicola cage is 57 and Riko Shibata is 27 and they confirmed that they were expecting in January.

The couple tied their forever knot in Las Vegas at the Wynn Hotel in February 2021.

With a huge smile on his face, Cage said that he was expecting a baby girl. And Clarkson immediately said that she knew they are expecting a child.

He says he wanted to call her this because he fell in love with Across the Universe by the Beatles, which is his favorite song, and he thought that Lennon would be fit for his daughter.

As for Augie, Cage says that this honors his father, August Coppola who died in 2009. Nicola Cage further says that he would call her Lenny for short.

Clarkson commented that she loves the name. Nicola is excited about his journey of being a parent. It’s a completely new phase of life and brings back childhood to life.

It’s not a predictable phenomenon, so they also had a name decided if it were a boy. The chosen name would have been Akira Francesco, after Cage’s uncle, Francis Ford Coppola an Academy Award-winning director who changed the name to Francesco.

Cage is going to be a father the third time. He has a child with his ex-wife Alice Kim who is 16 years old and is named Kal -EL. And he also has another son named Weston 31 with actor Christina Fulton.

The Oscar winner, Nicola Cage met his fifth wife in Shiga Japan, and they began dating shortly after his four-day marriage to Erika Koike was annulled in June 2019.

Cage proposed to Shibata on face time and send her the custom black gold and black diamond engagement ring through FedEx. She was in Japan at that time.

He says that Shibata left for New York and then went back to Kyoto, Japan and Cage went back to Nevada. He says they didn’t see each other for six months but were excited and they loved spending time with each other. So he finally proposed to her and they got engaged via face time.