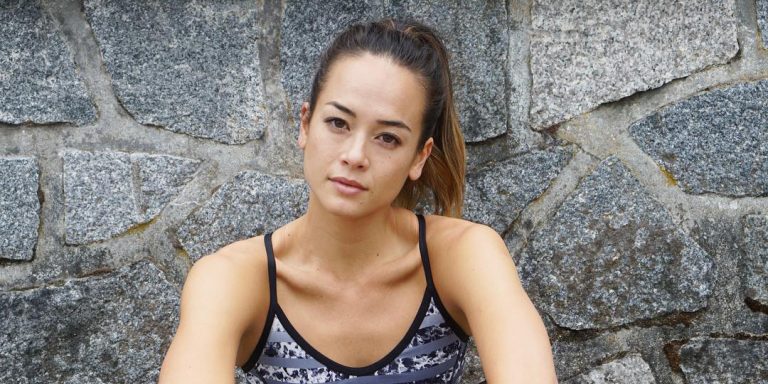 The social media personality, Andrea La Thoma was born on 11th July 1988. She was born in Malaysia.  Professionally, Andrea is a physical therapist. Andrea La Thoma is the wife of popular singer and actor Grant Gustin. Gustin is known for his appearance in ‘The Flash.’.

Andrea La Thoma was born in Malaysia but shifted to the US while she was young. She along with her family lived in Ohio. Even after being introduced to American culture, her mother ensured to keep her grounded and inculcate the values of their Malaysian culture.

She graduated from Kent State University. She had Physiology as her major.  She also studied thereafter and secured a Ph.D. in Physical Therapy. She then started her career in Physical Therapy in Virginia. Later, she shifted to California practicing in Sunnyvale.

She got popular soon after her relationship with Gustin was exposed publicly. Now, she is a social media star along with being a physical therapist.

Thoma is earning a handsome amount of income which constitutes from her profession as well as social media handles.

About her husband – Grant Gustin

Thomas Grant Gustin was born in Virginia. He studied at Governor’s School for the Arts. He had an interest in performing arts since his childhood. He started his journey y working for some locals. After high school, he became a part of the Music Theatre Program at Elon University. Gustin didn’t manage to complete it with Elon University and started working for renowned productions.

His first work with the big production was ‘West Side Story’ in 2010. The production house was a Broadway revival. He made his debut in the ‘Glee’ Tv show. The show is fiction based and he is playing the gay character of the club. The series portrayed the journey of the club including their personal and career life.

After that he got a chance to work with Lifetime in the movie, ‘Affluenza.’ He also did a guest role in ‘Arrow.’ The producers thought he would be the best fit for the spin-off as the main lead. He was much appreciated for his role and it got many great reviews.

Grant Gustin has a net worth of $5 million and his popularity and fan base are insane.

The couple got together in the year 2016 and were very serious towards each other. Gustin was in a state to propose her the very next year. He thought of proposing to her on the set. However, it was getting late day by day because of the postponed shoots.

So, he backed off from his initial plan and planned to ask her directly. He asked her at the beach when they were normally chilling in their morning. He mentioned in an interview saying, “We worked out on the beach, I forgot the ring was in my backpack. When we were sitting on the beach afterward, I thought she saw it. It turns out she hadn’t.”

It was very normal for Gustin to be nervous before taking the big step as nobody knew how Andrea will respond to it. It turned out that she took it lightly and laughed.

He said, “It was such an impromptu proposal and random moment, she thought I was joking, actually, when I proposed. It was obviously not a very good proposal. She laughed at first. But then she said yes.”

After all, it was a win-win situation for Gustin. They announced it publicly in April 2017. Andrea was wearing their engagement ring in the photo they posted.

The ceremony was held in Malaysia in the hometown of Andrea La Thoma.  All the relatives of Andrea witnessed the marriage ceremony. However, the news about the ceremony spread like fire. Gustin answered this rumor on Instagram and said that it wasn’t the actual ceremony and they are still yet to get married. He also mentioned that they just had Kadazan Ceremony.

Gustin had a great time meeting Andrea’s family and relatives. They said that the official document of marriage wasn’t signed yet even though the ceremony took place. Soon after in December 2018, the couple had an official ceremony in Los Angeles.

The marriage was described as beautiful and filled up with family and friends. It was a great celebration.

Andrea La Thoma gained popularity because of his husband being a known face of the industry. She earned a lot of followers on social media. Andrea La Thoma is a pretty woman with a great personality. Her posts also include tips, guidance, and advice related to physical therapy.

She posts rich content of exercises and basic postures. She also started a YouTube Channel in the year 2019. She makes videos related to physical fitness with basic exercises and techniques to have a proper physique. The title given to it is ‘Dare to be active with La Thoma Gustin.’ She features many of those videos on her Instagram handle.

Q: Who is Andrea La Thoma?

A: Andrea La is a physical therapist and a social star.

A: Yes, Andrea is married to Grant Gustin.

Q: What is the age of Andrea La Thoma?

I hope this was helpful. That’s all about Andrea La Thoma. Stay tuned to know more about celebrities!!!