[locust attack in Rajasthan] Is world very near to its end? Is God giving signs to us now? How’s the things now?

Locust attack in Rajasthan The desert locust plague has hit India again but this time it’s the worst locust attack in 27-years. Locusts are related to grasshoppers and are feared for ancient times. They form … 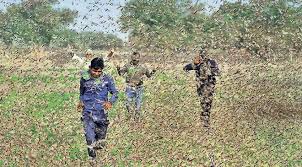 The desert locust plague has hit India again but this time it’s the worst locust attack in 27-years. Locusts are related to grasshoppers and are feared for ancient times. They form enormous swarms that spread over a vast area of land, devouring the crops and leaving serious agricultural damage in their wake. These insets have destroyed the societies since the pharaohs led ancient Egypt. They can cover more than 150 km in a day and can stay in the air for a long period of time. The swarm can be 1191 square km in size and pack between 4 to 8 crore locusts into less than 1.3 square km and can eat 1.9 lakh ton plants every day.

From where they came and what they did?

The locust enters India via Pakistan this April where they flew in from Iran last year. From Rajasthan they likely to be entered Madhya Pradesh via Neemuch and have advanced to Ujjain and Dewas. The locust attack along with the COVID-19 has created a huge impact on Rajasthan. The damage done by locust has been extremely high. In most of the tehsils, crop loss is above 60%, some even recording 100%. Due to which the Central Government has to take some serious actions and for which they announced a special relief package worth 68.75 crore. The state government is largely relying on Pradhan Mantri Fasal Bima Yojana (PMFBY), but only four districts are eligible to receive claim despite reporting damage in 12 districts.

There many reasons why it’s difficult to control or prevent a locust plague, including the remoteness and breadth of the areas across which they are spread and limited recourse in some of the affected countries. But experts can look at past weather patterns and historical records to identify the areas where swarms might occur and spray those areas with chemicals. Though the expert worries that locust plagues will worsen in warming word.