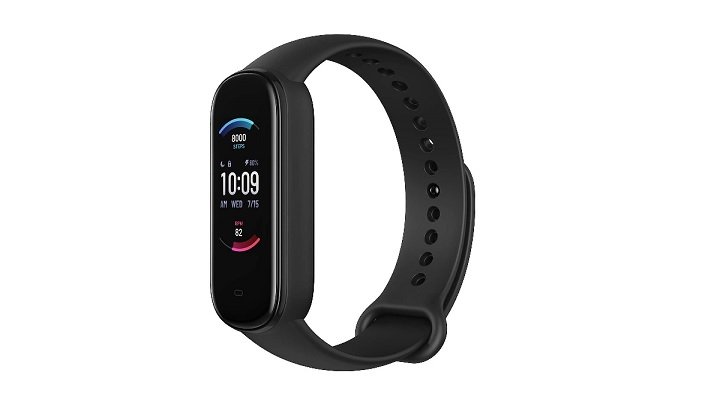 In early July, the Amazfit Band 5 was spotted at the FCC. The listing revealed a number of details including an image of the printing on the retail box. The fitness tracker has now been spotted on Amazon with a release date set for the end of the month.

The Amazfit Band 5 shares the same design as the Mi Band 5/Mi Smart Band 5 and can actually pass for Xiaomi’s own fitness tracker which of course is manufactured by Huami. However, some of its features are different.

For example, the Amazfit Band 5 has Amazon’s Alexa voice assistant built-in. So you can talk to the band and ask it questions, set alarms, and timers, create shopping lists and control compatible smart home products.

The Amazfit Band 5 has an HD color AMOLED display with over 45 watch faces that includes 2 customizable ones. It has support for music control and can also serve as a remote control for your phone’s camera. The battery life is put at 15 days for typical usage and 25 days in power-saving mode.

The fitness tracker has a price tag of $49.99 and will be available in Orange and Midnight Black. According to Amazon, it will be released on September 30 but you can pre-order it now.

UP NEXT: Amazfit Neo is a retro watch with advanced features; now on pre-sale on AliExpress