Gadgetsblog
HomeTop TrendingA new Galaxy found in the early universe is actually similar to The Milky Way Galaxy. Read to get all the updates. 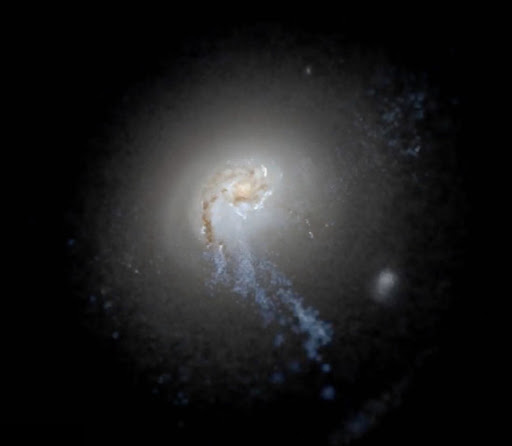 A new Galaxy found in the early universe is actually similar to The Milky Way Galaxy. Read to get all the updates.

During the Big Bang theory, Scientists discovered a very small galaxy which is all grown up now. It was discovered by the scientists when our Universe was just 1.4 billion years old. The scientists also got a name for this newly found Galaxy. It is called as SPT0418-47.

But do you know why it is different from all other galaxies? Why is it unique? If you don’t know where we have the answer to all these questions. The speciality of this new galaxy is that it exhibits many similarities as the ‘Milky Way Galaxy’. Yes, SPT0418-47 is found to be very similar to our galaxy ‘Milky Way’.

But the newly found galaxy doesn’t have it’s curved like Milky Way Galaxy. SPT0418-47, have a disc that is flat in shape and is continuously rotating. The mass of both the Milky Way Galaxy and SPT0418-47 have the same mass. The SPT0418-47 also has a galactic bulge. The bulge is a symbol of its beautiful growing body. According to Francesca Rizzo, 12 billion years ago the Milky Way and all the spiral galaxies we’re exhibiting certain similarities within them. According to previous research, Scientists claimed that the galaxy including the Milky Way galaxy is hot structures. It was believed that stars revolve around the galaxies and create chaos over there. But the newly found galaxy,  SPT0418-47, tends to be cooler and lighter. It is claimed that the galaxy can’t be seen on its own. The gravitational lens is used to see the SPT0418-47 galaxy. Basically, there was no other galaxy like Milky Way galaxy before the SPT0418-47 came into existence. According to scientists, the newly found galaxies have the more organized ring, and the stars revolving around it don’t create any chaos over there.