Gadgetsblog
HomeEntertainmentA white man travelling in a london underground provokes black males until he ends up unconscious due to a punch! 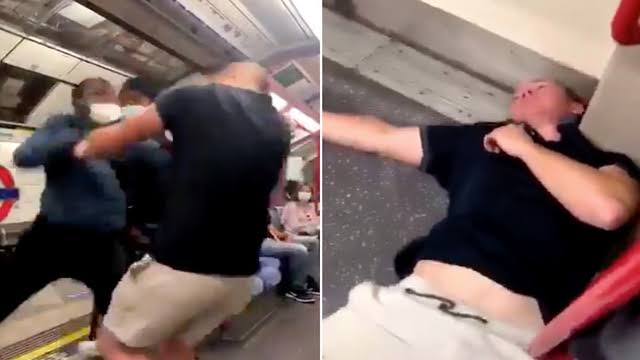 A white man travelling in a london underground provokes black males until he ends up unconscious due to a punch!

Two videos have recently been very trending on various social media platforms, mostly on Twitter and Instagram with the reach of approximately 25,000 and 2,00,000 respectively.

The videos are about racism and they include a white man calling for trouble while travelling in an underground metro in London. The white man repeatedly provoked the people travelling in the metro and hence it resulted in ugly consequences for him.

A white man reportedly named Billy Steel was punched by one of the three black men that were travelling alongside Billy in the central line after the man started giving hideous labels to the black travellers.

The white man dressed in a navy blue t-shirt and beige shorts showed the audacity of calling the black males as his ‘pets’ which was highly disrespectful and the people witnessing the event also felt the same.

Not only this, the shaved-headed white man also claimed that the country was home to the white people and the other race living there were going to go back. Billy challenged the black males by stating that he knows that even they know the same.

To this, the other passengers picked up a question by asking where will the black males go off to. However, to this, the white man very cunningly replied that everybody knows where they will be sent back to.

The white man not only behaves in an ill-mannered way to the black males but also asks other people, including the woman who was shooting the video, to shut up. The white man also continues to behave in the same manner by stating that he feels that the black males were inferior in standard when compared to the whites.

While he continues to trash talk the black males, they get up to get down to their desired stop. However, Billy continuously provokes them which results in one of the black males punching the white who ends up unconscious.