Gadgetsblog
HomeLifestyleA mother accidentally runs over a six year old with a lawnmower, causing him to lose his foot forever! 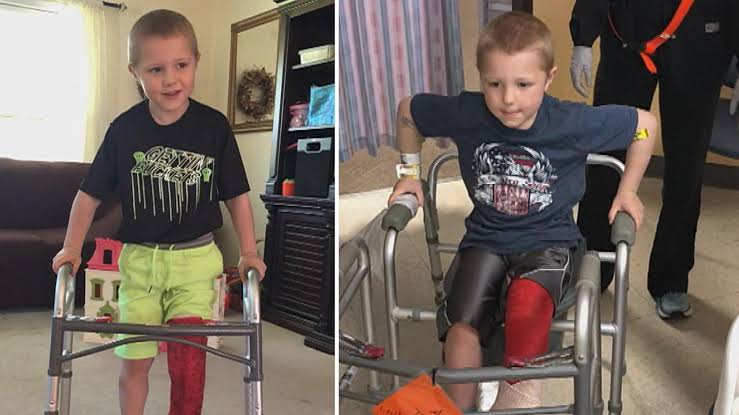 A mother accidentally runs over a six year old with a lawnmower, causing him to lose his foot forever!

A very tragic accident took place recently when a six-year-old boy lost his foot completely by his mother who did not realise it at first.

Bethany Douglas, 41, who is from Mount Vernon and a mother of five accidentally ran over her son’s foot with a lawnmower when she was driving it at her home in Missouri and initially thought that what she had run over was merely a paving stone until she heard the screams of her son.

The six-year-old Jonah Douglas was crying in pain when her mother realised what she had done and was immediately rushed to the hospital in hopes of a positive response from the doctors. Unfortunately, the family felt shattered when they heard that their sports-freak active son could not have his foot reattached and amputation was necessary from the ankle.

Reportedly, the upset mother was crying the whole day about what had happened and was highly worried if her son could ever walk again. A ray of hope was seen when the son started showing activeness just within weeks of the surgery. It was over-joying for Jonah and his family to learn that he could walk without any external help just within two months of the amputation.

Bethany Douglas felt extremely emotional initially when she had to witness her son walking with the aid of a prosthetic. However, lucky for them that it is not the case now. Bethany awaits the day when her son will be able to run again as he used to do before as she has high hopes and knows that day will come soon.

The family had a rough time again after a couple of months due to another accident in the family that resulted in the amputation of leg of a daughter. However, the family is trying their best to deal with the hard times positively and witnessing Jonah bouncing off a trampoline is currently covering the bad sights.