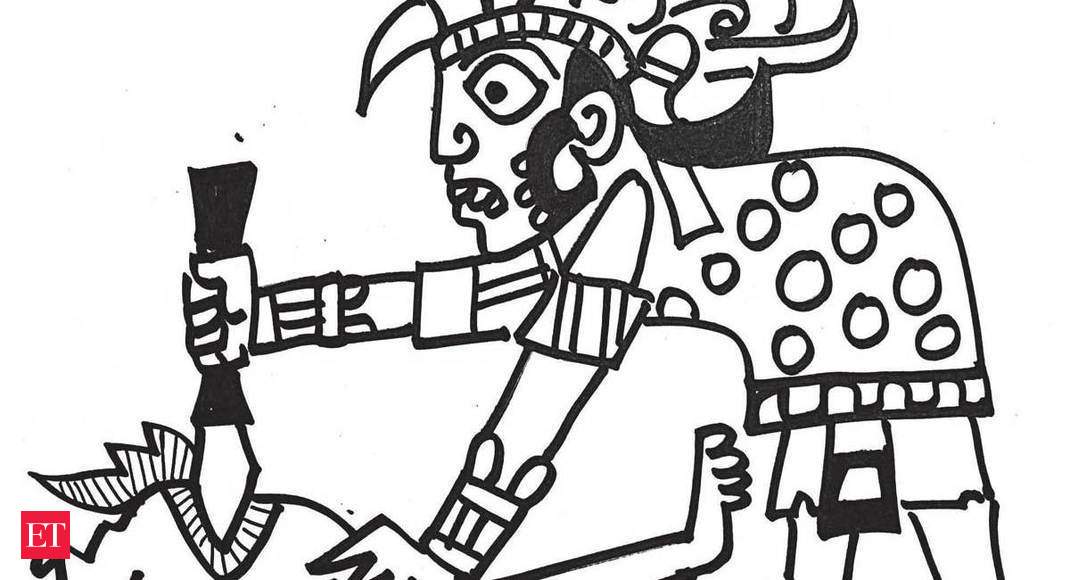 Share
Facebook
Twitter
Pinterest
WhatsApp
In Mesoamerica, the Aztecs sacrificed humans to their gods. This was deemed barbaric by Spanish conquistadors who arrived there in the 16th century. It became the reason to label them savages, justify their conversion into Christianity and market the conquest of their land as a civilizing mission.

Yet, today, historians challenge this simplistic reading of human sacrifice that eclipses the even more barbaric nature of the European conquest of the Americas. It is becoming increasingly obvious that ritual sacrifice had a strategic political role. It was a powerful political lever to establish elite groups, subjugate conquered tribes with fear, and mitigate the need for repeated wars, and collect tribute with relative ease, in a land with high population density and repeated famines.

Was it the right way? In the question lies the problem. For what is the right way to control a people? To demand their submission to a code of laws that regulate their conduct. Who decides? Every political model from monarchy, to oligarchy, to theocracy and plutocracy, to democracy, uses violence for brutal domestication and exploitation of nature and humanity. The act of civilizing is, in essence, a barbaric act.

The Egyptian pharaoh did not hide this fact when he held in his hand a crook (to keep sheep in line) and a flail (to remove chaff of grain), as symbols of control and submission. The Roman empire too brutally suppressed pagan cults across the empire after the emperor converted to Christianity to unify dissenting groups. Islam wiped out Zoroastrianism and Christianity as it took the ‘holy word of God’ from Arabia towards Persia (modern Iran) and Anatolia (modern Turkey). Thus, religious wars enabled empire-building. In India, the Brahmins used caste to create power and to exert control.

Those with economic and political power became ‘dvija’ or twice-born.

The service-providers became servants of all. Below them were the polluted castes, and even below them, the wild hunters and foragers of forest. Purity was a currency to psychologically dominate the world and it was a tool used by all communities.

We still receive Whatsapp forwards of dalit families not being allowed to cremate their dead in savarna crematoriums, of them not being allowed to drink water from the same class in restaurants, of savarna families protesting a lower caste woman working as cook in anganwadi schools. Are they mere outliers of a once-oppressive system or a dominant contemporary truth that we choose to avoid? It is shocking when reports show that it is ‘low’ caste groups involved in riots against Muslims.

No one, other than activists, wants an end of the system – they just want to be higher. And the way to do it in India, in the Hindutva era, is to position themselves as ‘purer’ than beef-eating Muslims.

When the Spaniards opposed Aztec human sacrifice, it was not from the point of view of human rights, but more from the point of view of harvesting souls for the Church and land for the king. Likewise, opposition to caste is not just about equality and social justice, it is also about opposing religion in general and Hinduism in particular – an ideological war, not simply a moral one. We live in times when ‘hijab’ is argued as an expression of feminism by migrants in the secular republics of Europe and America, while women in Middle East fighting against its enforcement in Islamic republics are being jailed. We live in times when even Gandhi’s statues are being removed because he had racist views in his formative years. Cancel culture is not more moral than lynch mobs; it is just another way to grab power.

Aztec society was hierarchical, tribal, innovative, artistic, hegemonic rather than territorial, and had many common features with Brahminism, which did not believe in human sacrifice but had no problem entire communities ‘polluted’, unworthy of touch. Both had grand mythologies, a deep understanding of astronomy and saw the cosmos as an outcome of sacrifice and divine games. Both believed in the concept of repaying debt to the gods, to nature and to society. One did it through blood, the other through notions of purity. In European eyes, this made both of them savage. The savarna beneficiary of Brahminism would be horrified at the idea that he is being compared to Aztec ‘savages’ but this is the global truth. The powerful domesticate people with ruthless strategies.

Of course, this brutality needs to be masked. Which is why Europeans cleverly marketed the ‘era of colonization’ as the ‘age of enlightenment’.