Gadgetsblog
HomeTop TrendingPerseids Meteors is Going to be Witnessed From Earth From 17 August to 26 August!

Perseids Meteors is Going to be Witnessed From Earth From 17 August to 26 August!

Finally, a piece of the interesting news found it’s way to 2020 when all of us only had bad news to hear. The Perseids meteor show is going to be active from 17 August. It happens once in a year and is considered as the best meteor shower. The numerous bright meteors and fireballs shooting through the air makes it so convenient and wonderful to capture for people from the earth.

Meteors are a bit of rock and ice that are injected through comets as they manoeuvre around their orbits around the sun. It is seen when the earth passes through the trail of debris left behind by a comet or an asteroid.

When a single meteor reaches the earth it is known as Meteorite and when a cluster of meteorites encounter at a single place, it is better known as a meteor shower. According to the research of NASA, around 30 meteors showers happen every year and are visible from our planet. It was first observed around 200 years ago and takes place every year in mid-august.

As meteors touch the earth, the resistance leaves the space intensely hot and as meteoroids surpass through the atmosphere they leave behind visible glowing gas which makes it so beautiful to watch. 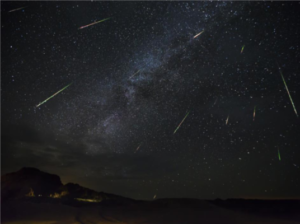 These meteoroids are best visible through Northern Hemisphere part areas in the pre-dawn period. Sometimes people can also see it at as early as 10 pm and it is said that they look much more clear and wonderful on a cloudless night when the moon is not extremely bright.

According to NASA, this year the meteoroids showers are encountering the last quarter of the moon phase which is half lite by sunlight. It rises during midnight and sets at noon. This can restrict it from becoming much visible due to the extreme brightness of the moon.

It can reduce the visibility of meteors from 60 per hour rate to only 15-30 per hour. It will be confirmed on 17 August how much visible it will be to the people.