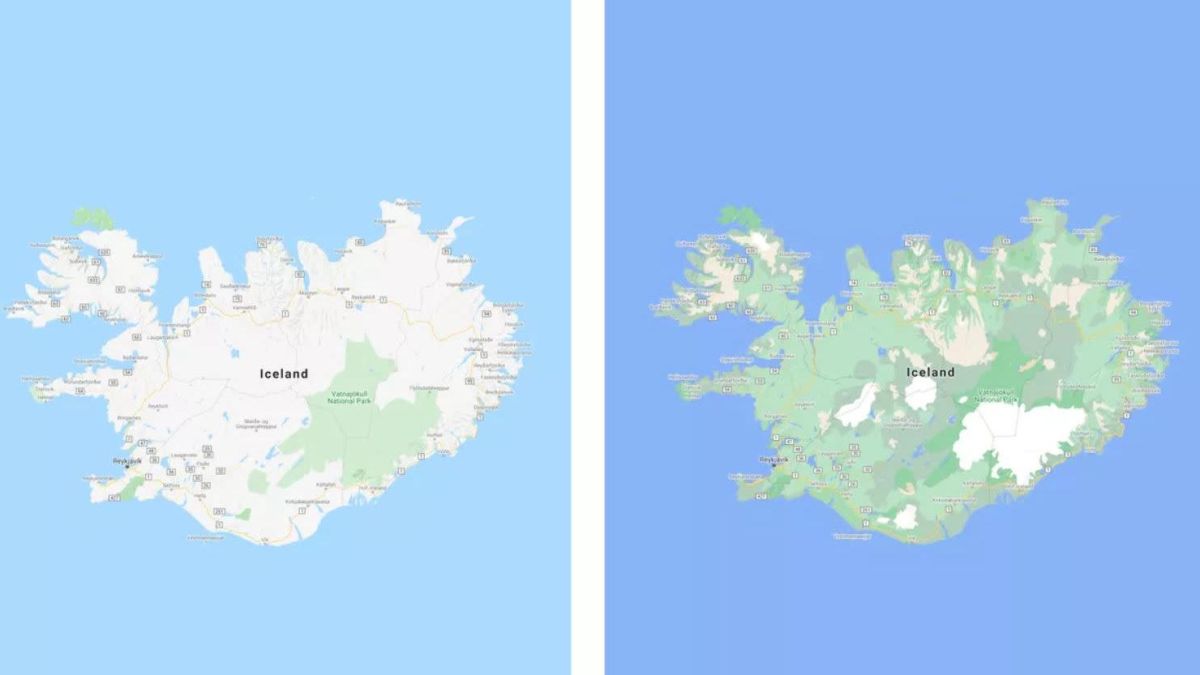 In this before and after shot, you can see more of Iceland’s natural features like forests and snowy mountain tops in the new Google Maps update. Graphic: Google

Google Maps is getting a colorful new update in the coming weeks, adding terrain and street-level granularity to its UI that, after 15 years, was in desperate need of a makeover.

To do this, Google’s using computer vision (a form of AI) to analyze landscape features in its extensive library of satellite imagery and color-code them based on the terrain—sandy beaches and deserts in tan, snowy mountain tops in white, and vegetation in green, with the denser the forest or local plant life, the darker the shade—so that users can get a better idea of an area at a glance. In a blog post Tuesday, Google said these more detailed maps will be available in the 220 countries already supported by Google Maps, “from the biggest metropolitan areas to small, rural towns.” You should start seeing the update sometime this week as it rolls out internationally.

The company’s planning to flush out Google Map details in more metropolitan areas as well. Supported cities will show the accurate shape and width of roads to scale along with sidewalks, crosswalks, and pedestrian islands among other information to help users navigate the area. With so many people going stir crazy from being cooped up inside or trying to avoid the petri dish of a crowded subway car or bus, cities are seeing a boom in people biking and walking and as a result, more people are using their phones to help them get around. Google also noted that knowing where the nearest crosswalk or sidewalk is can be “crucial information if you have accessibility needs” such as having a wheelchair or stroller.

In the update screenshot (right), Google Maps outlines crosswalks and sidewalks among other details.Graphic: Google

These updated city maps are limited to London, New York, and San Francisco initially and will roll out in the “coming months” with plans to eventually expand the feature to more cities.

This makeover comes at a time when Google’s status as the de-facto navigation app has come under serious fire on iOS and Mac. In recent years, Apple has overhauled its maps app design and added functions to directly compete with Google Maps, such as its higher resolution answer to Street View, Look Around, and flashy features like scanning the skyline to better pinpoint your location.