NASA, on 30th of July 2020, sent its Perseverance Mars Rover from Cape Canaveral, Florida. It was another attempt by Nasa to investigate the Martian atmosphere, this time with upgraded technology and more advanced mechanism onboard. The Perseverance Rover has some of the advanced tools to analyze the soil of Mars for various essential elements and bring back the soil samples to be studied here on Earth. The rover is also equipped with a High definition camera to have a never seen before a clearer view of the martian surface. One of these is the oxygen-generating gold box which will produce oxygen from carbon dioxide just like a tree. Read the full article to know more about the technology and how it will help in future human expeditions on the red planet.

What is MOXIE? Among the tools that are onboard the perseverance rover one of them is the Mars Oxygen In-Situ Resource Utilization Experiment or MOXIE. This is a great attempt by NASA considering the planet has only 0.2 % of the atmosphere as oxygen content. This tool is fitted in a small gold box and is just a first of its kind small experiment. The success of this tool could prove a boon for future human explorations or missions on mars.

It would be difficult for astronauts to carry oxygen to the red planet and to thrive on it there. Thus this new technology that produces oxygen from the electrochemical breaking of carbon dioxide into carbon monoxide and oxygen could help provide the fuel for spaceships to return back on earth. MOXIE produces 10 grams of oxygen per hour. 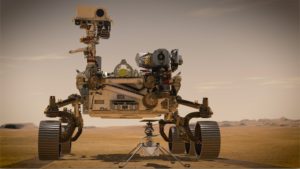 The oxygen and carbon monoxide molecules are then released back into the martian atmosphere. This process will not affect the Martian atmosphere much. MOXIE aims to produce 99.6% pure oxygen. NASA says this being an experiment and future missions will consist of tools 100 times bigger and efficient so as to facilitate the needs of astronauts. These missions will store the oxygen formed for other purposes as well.