Gadgetsblog
HomeEntertainmentFind out how Arnold politely shuts up hater who calls him “snowflake”!! 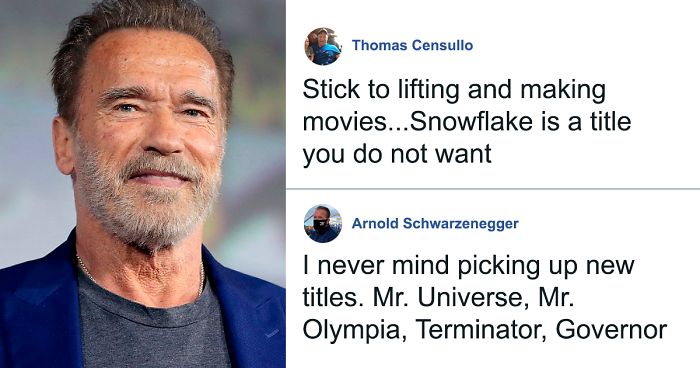 Find out how Arnold politely shuts up hater who calls him “snowflake”!!

If you previously did not believe that some very powerful messages could be given without the use of big words that will require you to look up the meaning in your dictionary, Arnold is here to change your mind.

Arnold Schwarzenegger has been playing the role of the bad guy in movies very well through the years, however in reality he has no intention of upholding that reputation. In fact, the reputation that he holds is completely opposite to the so-called bad guy. He has been trying to make a change for the better in this world for years now.

Recently on facebook, a hater commented on his profile and asked Arnold to stick to movies or be ready to gain the title of “Snowflake”. The comment did not affect Arnold in a negative way at all. What happened next proved to be a lesson for the one who commented initially and all the others who viewed Arnold’s response to it.

To the comment, Arnold replied very positively saying that he would not mind being called anything new. He would love new tilles as the Terminator or the Governor. He also very politely indicated that it is okay if he is called a “Snowflake” However, Arnold later continued to explain to the hater that he should be ready to accept that people can disagree on what the others agree too. However, he also included that instead of hating on the other person, one should take time to realize what is going on and reflect from it. Most importantly, he gave out a message that one should learn and expect to hate. The message politely ended with Arnold wishing the hater good luck in all his endeavors.

The comment became a trending point and shut some haters up in a very decent way. Arnold held up to his good reputation and educated various users in such a simple and healthy manner.