Lindsey Vonn, the best sky Alpine skier who has won four women’s World Cup overall championships proved how much fitness enthusiast she is and how much she takes her leg days seriously with a video which she uploaded on Sunday.

The video went viral in which his workout partner, star of Jumanji: The next level star Dwayne Johnson was also spotted which made the video more controversial. Dwayne Johnson is 48 years old but his fitness and body don’t really reveal his age. He has been gymming since the time of his professional wrestling days. Vonn utilized his fitness skills and did a couple of intense squats by his side. She tagged the official account of Dwayne’s Project Rock line of fitness apparel which showed that she was using products from their collection.

For this intense workout session, Lindsey Vonn chose to wear a pair of pink leggings with patterns which she flaunted with her toned legs with her own style and charisma. Along with her pink leggings, she chose a short white crop with short sleeves. And around her waist, she chose a black weightlifting belt. 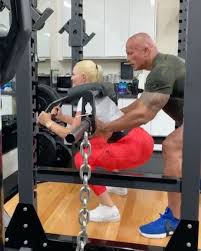 Lindsey Vonn used a padded safety squat bar to perform squats and in place of weights, she chose two huge silver chains to do the lifting part attached to sides of the bar.

She groaned after each rep and her spotter moved ahead and kept his hand on the bar every time she squatted down. In the video clip, she showed 6 reps but disclosed that the whole leg day session includes 400 of such intense reps.

Lindsey Vonn’s gave an overwhelming response with the maximum number of likes and comments which clearly showed that they are very impressed and inspired by her workout sessions.