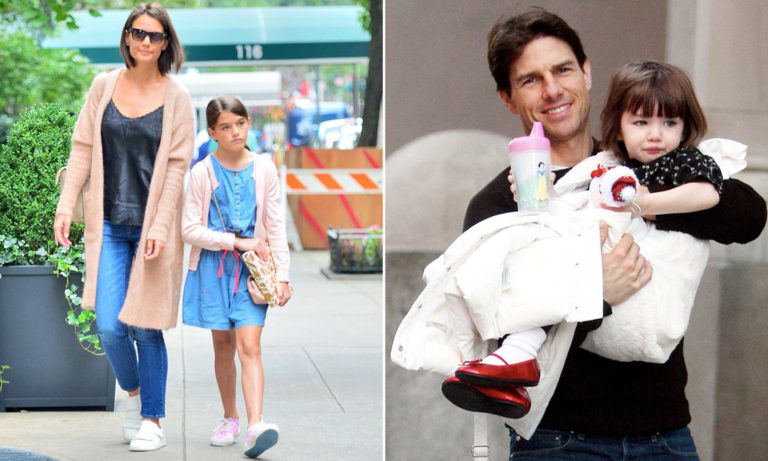 Showbiz town is certainly facing the odds of the lockdown but that doesn’t stop them from being glamorous. The daughter of legend Tom Cruise and star Katie Holmes, Suri Cruise picks her dogs from the groomers. However, the more astonishing fact is that the star kid is a stunning copy of her mother. The paparazzi click the mother-daughter dua many times. But recently, the daughter was clicked on her way to take the pups and she truly looks elegant in her simple attire.  The 14-year-old was spotted in Manhatten, wearing super comfy clothes and a protective face mask.

The teenager is sporting baggy grey sweatpants and thong flip-flops. These sandals are coming back in trend along with the summer model look from the 90s. They are the most easily available pair of footwear, allowing a free flow of air and thick padding on the foot. Her mother, Katie Holmes, who joins afterward, was wearing a chic ensemble. More so, she sports the orthopedic strap sandals, not giving too much attention to whether or not its a statement. However, the two have never been spotted with Tom Cruise.

The fashion of Suri Cruise is bound to create statements since she is the daughter of such a great couple. Her parents may not be on talking terms, but she does get the credit of being born as a star kid. Whether they unite as a family because of their daughter, is highly uncertain.

The topic of the father-daughter relationship is always garnering news. It has been 8 years since Cruise was last clicked with her. Although some sources claim that this distance arises due to differences in faiths, Tom is a follower of Scientology. However, the Church dismisses such claims saying that the ministry does not work this way. Another explanation of the religion is that his two older children are not allowed talking to his second wife, Kidman. That provides a sumptuous explanation on this point. But recently, Tom publicly expressed his wish to be more involved with his youngest daughter Suri Cruise. We hope it goes uphill for them from here.

Watch the trailer for Tom Cruise’s latest flick on YouTube.