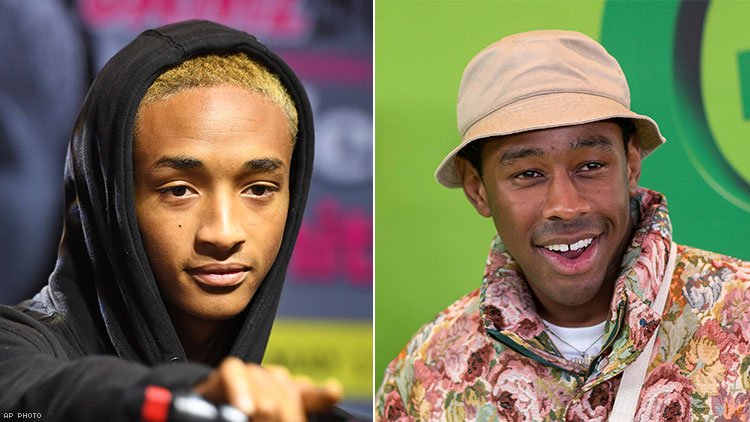 Yet again, Jaden Smith has fuelled previously sparked up rumors.
At the Grammy Awards 2020, Tyler took the gilded gramophone for Best Rap Album for Igor, this week. Jaden Smith tweeted,” My BF Just Won A Grammy” in his signature capitalized style. This was tweeted just moments after Tyler took the award. This has surprised the ones who have not been following the duo. However, for die-hard fans, this is a truth, they already know, without any confirmation from the star duo.

Jaden Smith first proclaimed her relationship with Tyler, while she was at the  Camp Flog Gnaw Carnival,2018. Tyler himself organizes camp Flog Gnaw Carnival.
Smith said,” Tyler doesn’t want to say, but Tyler’s my motherf–king boyfriend, and he’s been my motherf–king boyfriend my whole f–king life.” And Tyler just shook his head and fingers in response.
Later on, Smith also tweeted, asking Tyler not to deny this fact. Tyler, in response, wrote,” hahaha you crazy n—a man.” Following this, in a radio interview, Smith reconfirmed about her LOVE-RELATIONSHIP.
Till then, fans didn’t believe this announced reason being, both the rapper’s past life, relationships, and beliefs. Jaden Smith dated Kylie Jenner in 2013, then Sarah Synder from 2015-17. They both were spotted frequently kissing and cuddling in public. However, the two broke up, based on cheating rumors.
Smith’s relationship with Kylie was also talked a lot among their fans. Jaden is often credited as the reason behind Kylie’s break up from Tyga.
Tyler has supported Frank Ocean’s opening about as gay, although he has often been criticized for his homophobic and misogynistic slurs in his lyrics.
The relationship status of the two remains confusing. It is very difficult to decide if the rappers are dating each other or if they are messing up things for the people, ultimately to the benefit of their popularity.
Not to miss, Jaden Smith’s latest tweet has sparked up the matter again.