Gadgetsblog
HomeEntertainmentLet the Suspense Get Revealed, Which One Is the Best Super Car Bmw M240i, Audi Rs3, or Mercedes Amg Cla 45 S? 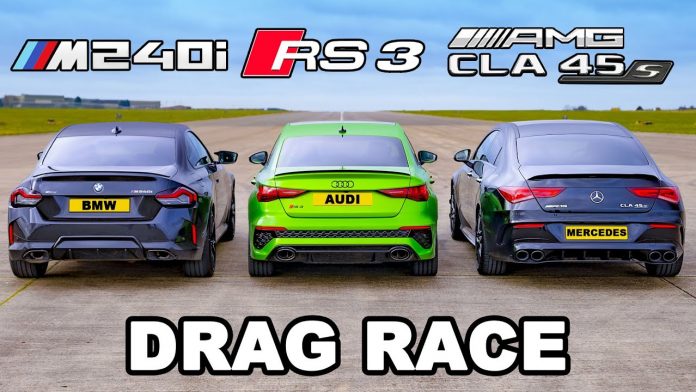 Let the Suspense Get Revealed, Which One Is the Best Super Car Bmw M240i, Audi Rs3, or Mercedes Amg Cla 45 S?

Humans are very much comparative. Usually, there are two sides to a coin, whether to go for this or for that. This is the question we arise, quite often in our lives. To get rid of the problem we have amazing solutions. One of them is we compare.

We find information, do some experiments, get a conclusion from it and arrive at the solution. To get an idea about which one is better of the three cars, a drag race was conducted by Matt Watson.

Drag races are races, conducted between two or more automobiles till the finish line. Drag races were started when just after the second car was built. It’s difficult to compare automobiles. And also the comparison depends on the basis and certain criteria.

What the other person considers best in the car might not be the same for some different person. But to arrive at an overall decision about the machine, drag race turns out to be a good option. And if a decision is to be made within limits of a certain time, say like 60 seconds or, drag race becomes a blessing. 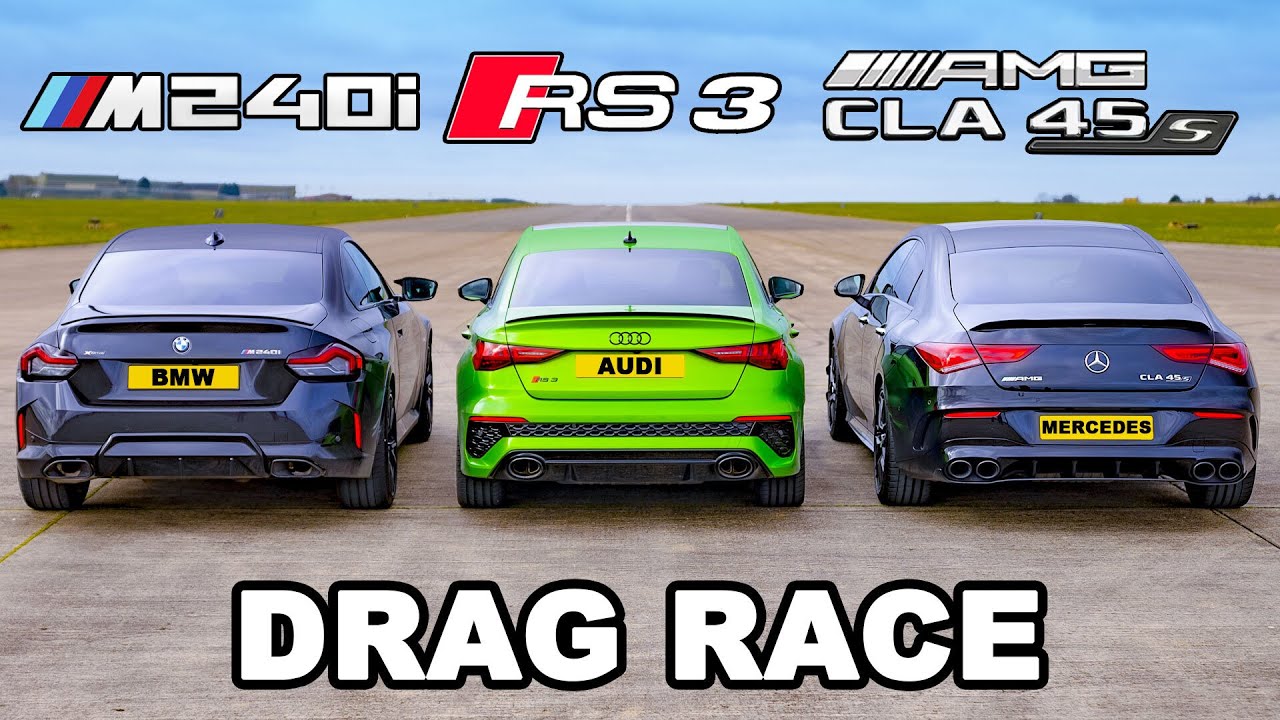 We all have our own unique opinion on a solution. Though the drag race might not be a complete solution it still hypes the audience and gives a feeling of excitement to the audience. So our three participants, if we say so are, BMW M240i, against Audi RS 3 Sedan and Mercedes – AMG CLA 45 S. All of these are to be competed against each other, to get the result. To know which one is best is difficult to say. So before knowing the result of our sports car race, as they say, let’s have a brief look at the features and qualities of the three competitors.

FEATURES OF ALL THE THREE CARS

In comparison, Audi RS 3 has 2.5 liter inline five-cylinders with a turbocharger that puts 400 horsepower and 500-newton meters of torque. It has a seven-speed dual-clutch automatic gearbox with launch control driving of all four wheels and it weighs 1575 kg which is lighter than BMW.

The Mercedes has two-liters turbocharged which is the smallest engine, but also the most powerful because it puts out 421 horsepower and 500-newton meters of torque and drives all four wheels for an eight-speed dual-clutch automatic gearbox with launch control. The weightage is the heaviest, that is 1659 kg and also the most expensive, starting from 61000 pounds.

So before starting the main events some skids were done to raise the temperature. Apart from this, exhaust note tests were also done. Then the main event began with the quarter-mile 402 meters. The race began at the start of three and the M240i had a great start. Audi also didn’t remain back, it gave a neck-to-neck competition. But just for fraction of seconds, it was laid back and BMW  won. Our most expensive car, could make a most expensive move and lost.

In the second round, Audi starts great and wins, whereas BMW comes second, again leaving Mercedes behind. To get the best of three, they again did the last round. So in this, the start was great by both Audi and BMW, but again Audi RS3, crossed the line first, leaving behind Mercedes and BMW. As usual, BMW came second and Mercedes came third.

So the final results are as such. Audi won completing the standing quarter-mile in 11.9 seconds then BMW was second finishing in 12.2 seconds and the Mercedes was the last crossing the line in 12.7 seconds.

After that, they started a rolling race at 50 miles an hour. So now the most expensive and heaviest car came first for the first time, Audi came second and BMW was the third one to arrive. After they another one by locking in third gear and this one BMW came first beating the other two. Mercedes was able to defeat Audi and this one was a neck-to-neck one.

We can conclude that it was an amazing drag race. The cars were neck to neck in most of the rounds. But if we look out Audi did the best. In a way, if we look at every car has its unique feature and identity. It has its own good po, and it’s up to you what you are looking for. Though this article might be helpful for fetching good details. Choose the best one for you wisely

It has one of the very best six-cylinder engines on the planet.  The cabin of BMW is nearly identical to that one of three series and four series or any modern BMW for that matter. It has excellent tech and builds quality. It also has the coolest colors in years. Its fantastic shade of metallic purple makes it look special. It has such a unique and exciting color that makes us very happy. It is a combination that is hard to beat off.