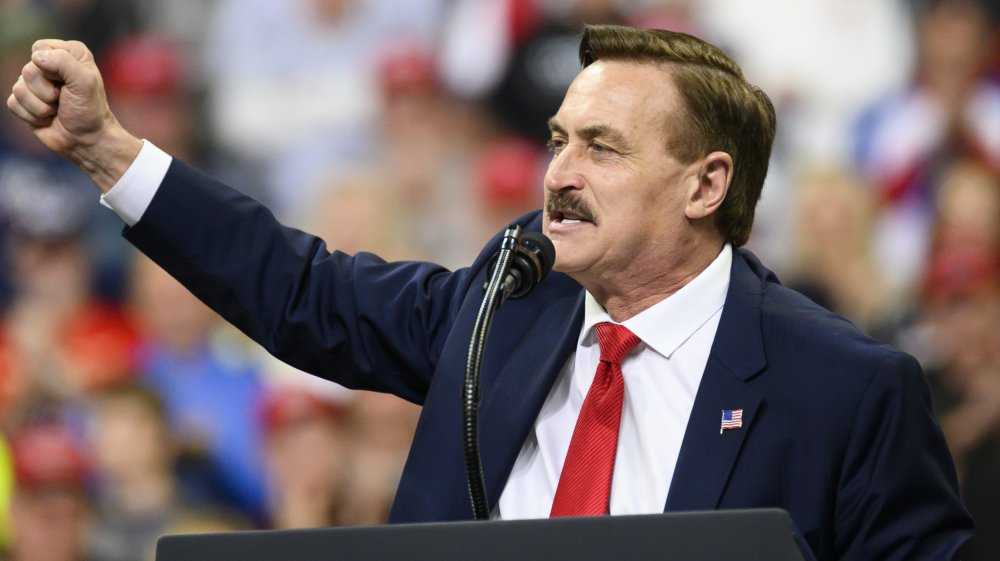 Mike Lindell is such a name famous for glorified success and criticized for many facts. Though, it cannot be denied that he is a self-made millionaire and a founder of the organization ‘MyPillow’. He started as a scratch and burned himself for years to shine like a bar of gold. Mike Lindell is a precise example of “miracles do happen”.

His journey of overcoming from being a crack addict to a multimillionaire is commendable. But as it is a hard pill to swallow that fortune always carries something unfortunate. He faces quite a few setbacks and was criticized for his deeds. But his journey from rags to riches and again dipping himself in a bucket of troubles is worth knowing. Scroll down to explore Mike Lindell’s amazing journey to his gross income. 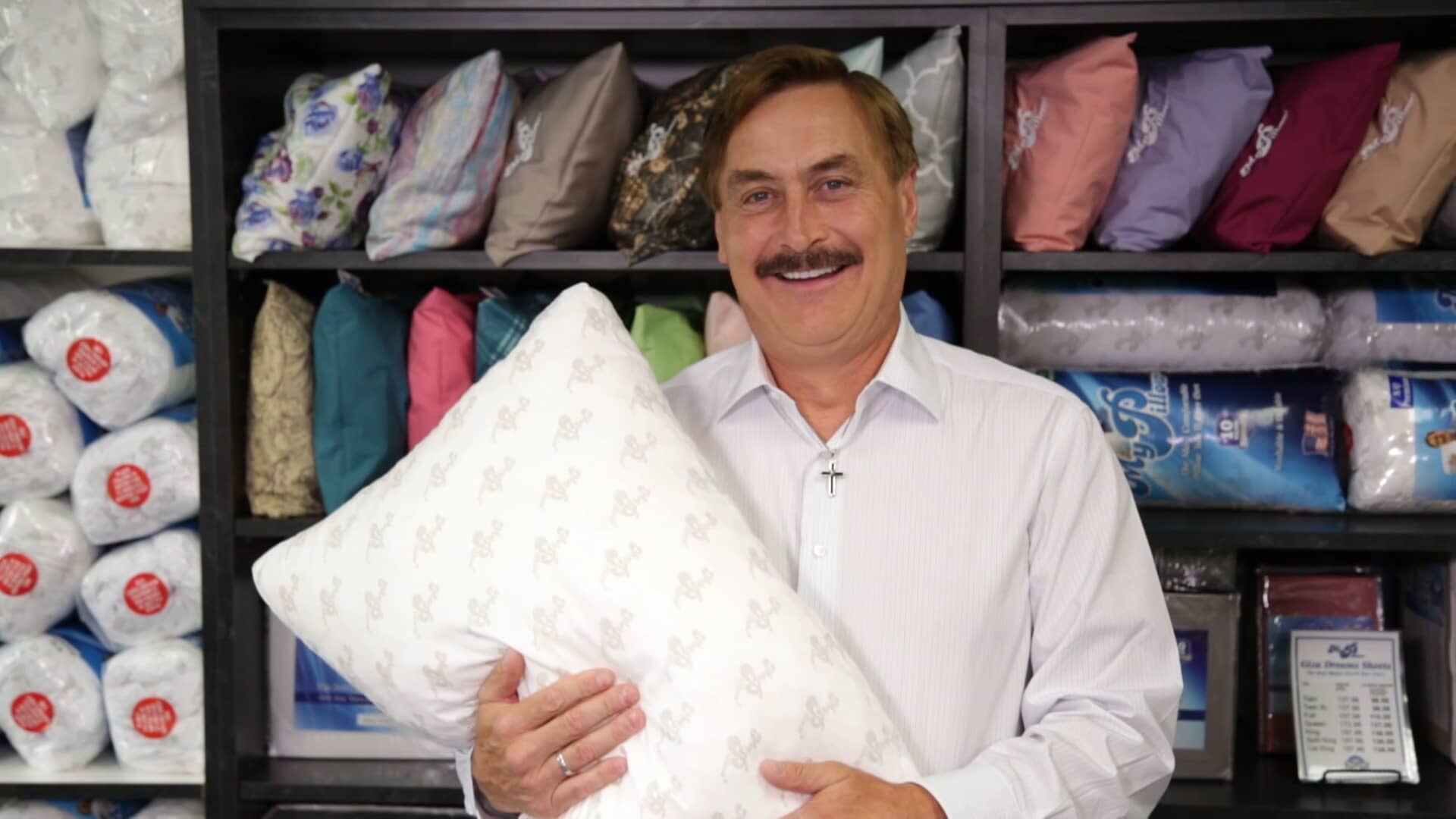 American legendary entrepreneur Mike Lindell was born in the year 1961 on the 28th of June. He is a native of Mankato, Minnesota. But after that Mike was raised in Chaska and Carver Minnesota.  His education venture was not that successful, he went to the University of Minnesota to acquire his education but was dropped off shortly after his journey was commenced as a student.

However, this was just the initial stage of Mike’s struggle and fight with his destiny. In the early ’80s, Mike Lindell was badly grappled by his addiction to cocaine, alcohol, and crack dating.  Along with his addiction, he was trying his luck to flourish as an entrepreneur, and before his dream project MyPillow, Mike Lindell has tried his hands on many entrepreneurial fields that list is quite long which includes cleaning of carpets the initial stage of his career, further, he tried his luck to make money as a professional card counter in Las Vegas which didn’t turn out so fruitful for him then he jumped on to raising of pigs, which did not fetch him much satisfaction and his bread as well. Moreover, he opted for being a lunch wagon but that was also proved to be unfortunate and he ended up being a bartender in a bar.

Mike Lindell’s addiction to cocaine not only made him struggle with his career but cost him his house, and his marriage and family as well. Her wife filed a divorce after he was almost bankrupt. Lindell mentioned that he attained sobriety in the year 2009 and managed to flourish as the most acknowledged entrepreneur of ‘MyPillow’. 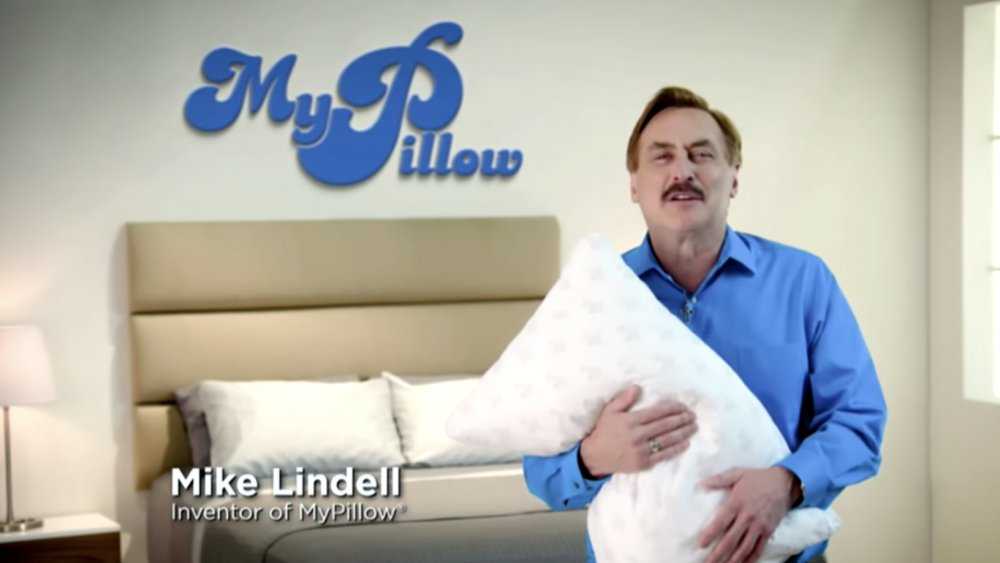 Mike Lindell established the base for MyPillow in the year 2004, while he was battling his drug and cocaine addiction. In the year 2009, In the month of, January finally, Mike combatted the battle with cocaine and drugs and gave himself completely to his dream MyPillow. He, himself is the patent owner of the pillow’s poly-foam designs and open-cell. Initially, he started with just a handful of five employees. Today he and his dream MyPillow rules over more than 1,500 employees.

Mike Lindell’s initial customers were from the mall kiosk where he sold a few pillows to people and resumed selling his products at malls, trade shows, and state fairs to earn his bread. After Lindell’s struggle of five to six years, he launched MyPillow’s first infomercial in the year 2011. That 30 minutes show cost him around $500,000 for its skillful and efficient production and was telecasted an average of 200 times per day approximately. Mike’s hard-earned money spent on the show turned out to be a sweet fruit and after the commercial began airing MyPillow acquired recognition all over the United States and Lindell’s business exploded tremendously.

The selling graph of MyPillow witnessed the highest spike and around $100 million worth of pillows were sold out in the market over the next 12 months.   Soon after the great success of an American entrepreneur Mike Lindell’s dream MyPillow, he tried to get associated with the Former American President Donald Trump in the year 2016, when Trump was just a presidential candidate. Lindell’s been a fanatical follower of Donald Trump as he did a favor to Mike Lindell in promoting his pillows. Even it was proven by the alleged source that Trump slept on the pillow produced by MyPillow at White House. Mike Lindell was also invited to the White House in an event named “Made in America” and was acknowledged for his pillows. 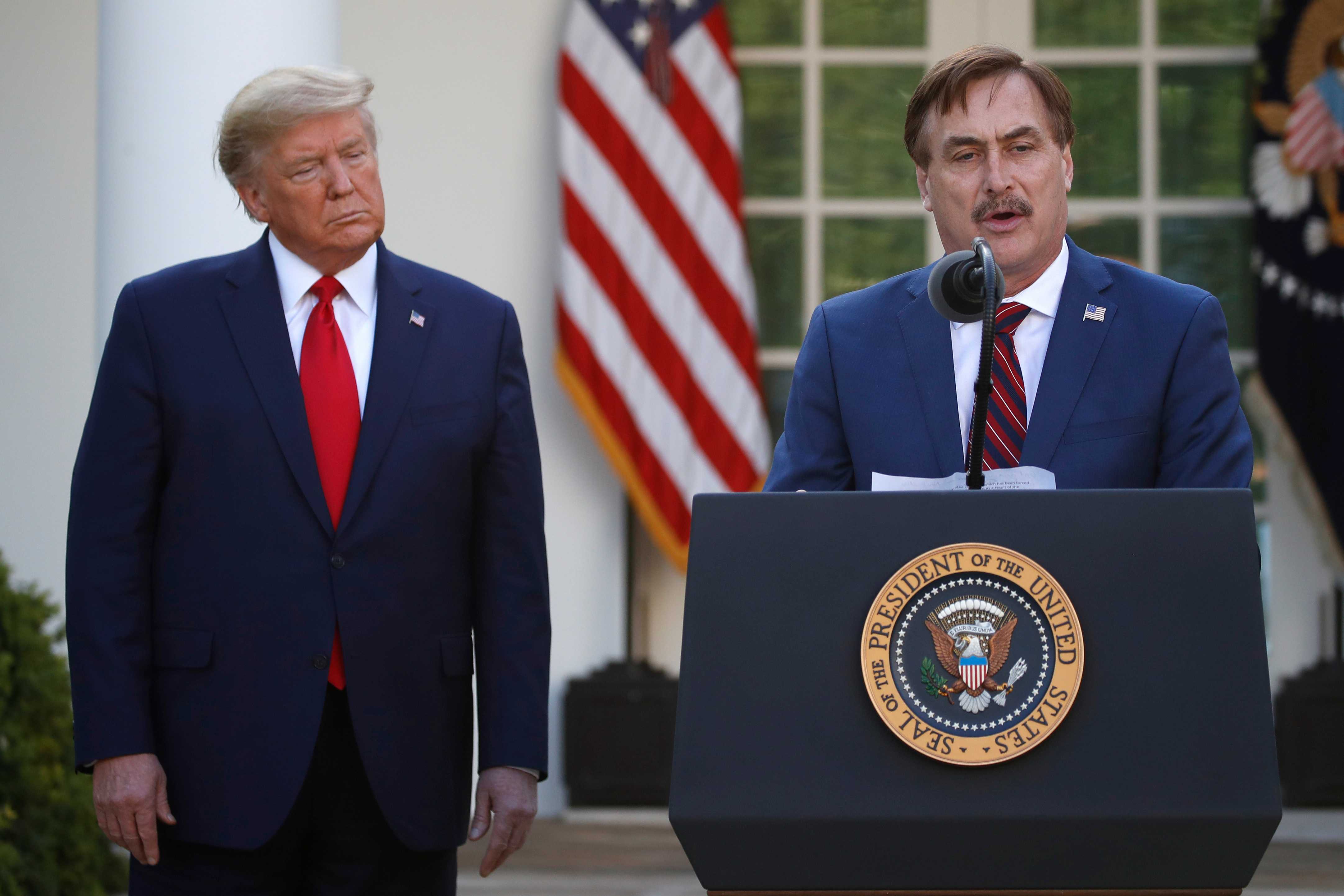 Even after a successful venture of Mike’s MyPillow, a turbulence glacier hit the entrepreneur’s pillow castle in the year 2017, when the Better Business Bureau knock down the MyPillow’s rating to ‘F’ and renounced the company’s accreditation. And the reason behind this was an offer that became the prominent slogan for the company “Buy one, Get one” which prevailed as a normal price of the product rather than being an offer.

Furthermore, Mike Lindell again dipped his toes in a bucket of trouble last year for promoting a plant extract named Oleandrin as a cure for COVID-19. Despite any evidence and without scientific certification Lindell dug his heels in proving that Oleandrin is a safe and prominent approach that can cure the Corona Virus. Mike Lindell even appeared on the hoarding of a company that produced Oleandrin named Phoenix Biotechnology.

The array of defamation doesn’t stop here, moreover, Mike Lindell was summoned from Dominion Voting System which filed and defamation lawsuit against him. Mike Lindell went rampant after Trump lost the election in the year 2020 and Lindell accused the Dominion Voting System of stealing millions of votes. And put an allegation of being unfair. This leads him into the dungeon of a heavy penalty of $1.3 billion by the company for futile accusations and using this as a trick of marketing strategy to sell more pillows. 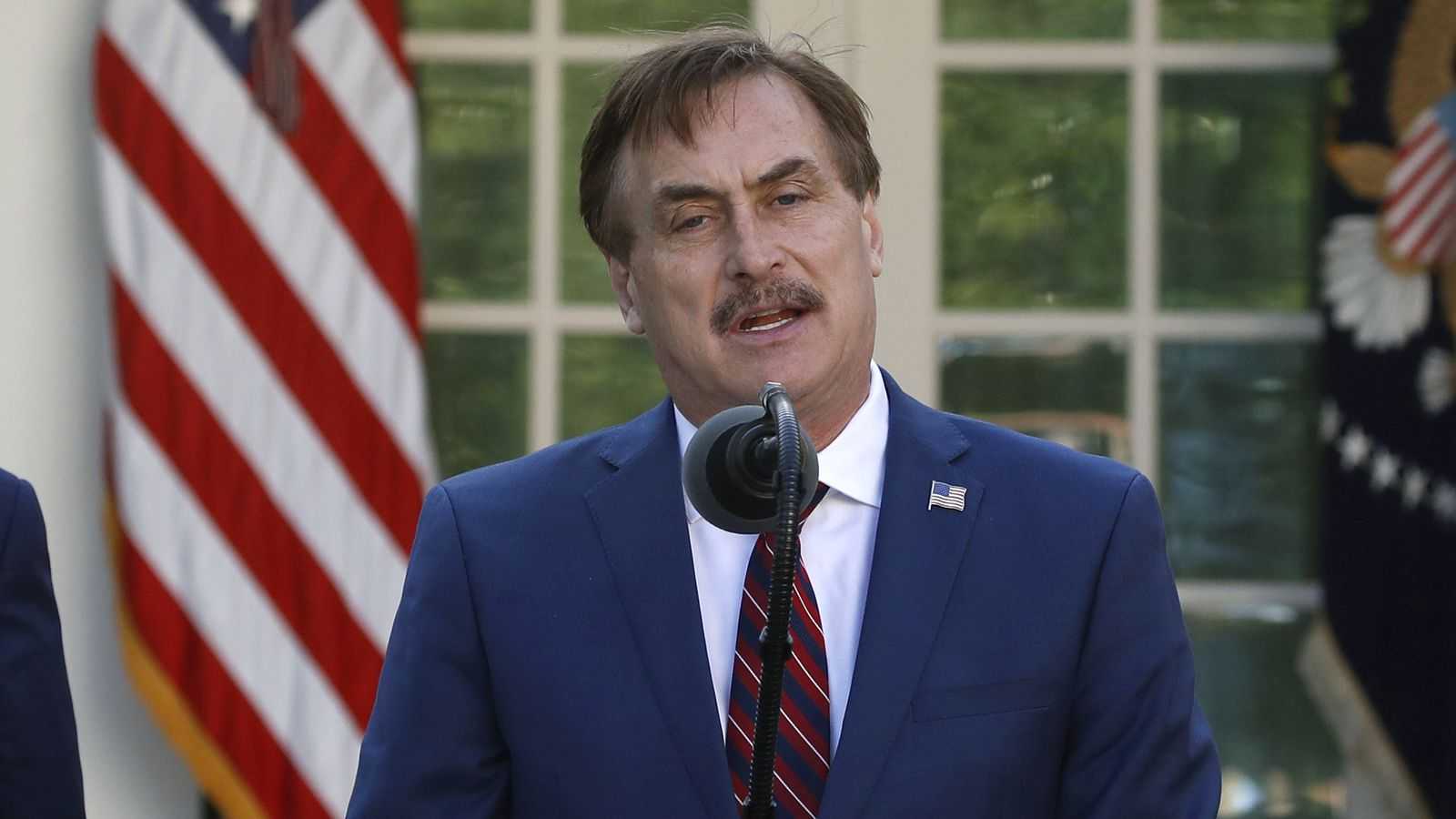 A most renowned American entrepreneur Mike Lindell famously known for his venture from obscurity to a glorified success story of MyPillow and his jump to the pit of defamation allegedly possesses a net worth of about $300 million.

Though his company began with just five employees and currently operating with 1,500 employees approximately as reported by Celebrity Net Worth.

TrendCelebNow affirms Mike Lindell’s net worth of approximately $1 million to $5 million in the year 2020.

Mike Lindell on the 22nd of February stated that this year he suffered a loss of $65 million in revenue due to the downfall in his company’s products sales quite a few retailers dropped his products because of the spurious election claims.

“There’s your story. Print it right. Don’t try and twist this” He commanded the outlet.

When Lindell’s organization was at the peak of fame, it generated a report that mentioned $280 million in revenue per year and sold more than 30 million pillows at an average base price of $45.

Interspecies reviewers: Here are some things you need to know about this controversial anime —

Q1. Who is Mike Lindell married to now?

A1. Mike Lindell has been married twice. His first wife left him after 20 years of marriage as he was almost bankrupt and he has two children from that marriage. Afterward in the year he got married to Dallas Yocum in June 2013 and filed for divorce in the same year in mid-July. And mention it was a prenuptial agreement.

A2. Mike Lindell is one of the most renowned entrepreneurs of the United States of America who has a net income of $100 million approximately. He is the founder of the most acknowledged company for its pillows tilted MyPillow.

Q3. How many My pillows are sold a year?

A3. After the struggle of about five to six years when MyPillow commenced flourishing after Lindell’s $100 million infomercials, he sold around 30 million pillows, and there was a spike in the revenue with reached $100,00 a year approximately.