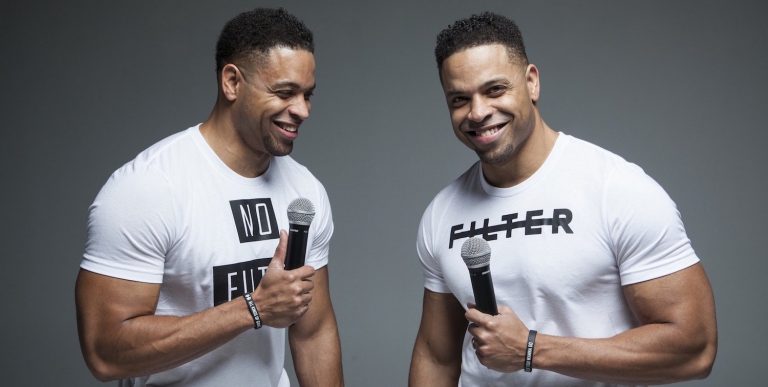 HodgeTwins Family: The Hodge Twins are Kevin N. Hodge and Keith W. Hodge who were born on 17th September 1975. They are popular YouTubers, comedians, and experts of fitness. They work together on the same YouTube Channel. They have 2.2M subscribers on YouTube.

HodgeTwins Family: The twins were born in Martinsville, Virginia. The Hodgetwins family had two more children, a girl, and a boy. They weren’t fortunate enough to lead a well-off life. The twins were even forced to shoplift to fill their belly. They told about the incident from Walmart. Somehow, they both managed to complete their graduation from American Continental University.

HodgeTwins Family: Their initial times were struggling they jumped from one industry to another to make money. They did a variety of jobs ranging from security guards to insurance company agent. The only motive for them was to earn a decent living while they had no interest in their jobs.

However, while working they started with YouTube videos, they did it along with their job. They were loving making videos and then, Keith Hodge decided to make videos full-time and quit his job.

Their first video on YouTube was published on 25th December 2008 on a common channel. It was a comedy video showing an argument. This was the start of their YouTube popularity. To date, they post one or the other comedy video on their channel.

Initially, the topic for their videos was the one decided by their viewers like advice. It was about the relationship advice. They showcased their point of view and talked in another reference. They also started another channel on Fitness and focused on personal fitness videos- exercises and advices. The channel name is TwinMuscle. It has over 2M subscribers.

However, after their first video, they got a lot of negative comments and criticism. It didn’t let them stop with what they started in fact; the twins started adding a disclaimer at the end of every video. The disclaimer is: “Do whatever the fuck you want.”

HodgeTwins Family: The twins were more inclined towards stand-up and acting. They accomplished their dreams and have made many world tours for comedy. They really look forward to Richard Pryor and Bill Burr. The twins make the script relatable and mostly from their personal stories.

HodgeTwins Family: The twins once faced a situation where their show got canceled because of political reasons. They had a comedy show in Tallahassee. The reason was their opinion about politics, they announced it clearly on Facebook and Twitter. They said, “the venue owner does not like our political views.” With #maga and #trump2020. Later the owner said it was because of their hateful speech they didn’t allow them to perform.

The twins were also criticized by Ryan Smith and Jeremy Matlow, Brian Johnson for making fun of transgender. They didn’t consider it as a topic to mock upon. In December 2018, they released a video mocking a viral video wherein the employees were being yelled at in GameStop. They made a joke about that person voice who was a transgender.

One of the twins said, “You need to do a better job of being a real transgender.” They also posted a screenshot of their canceled performance at The Moon without talking about the backup they were offered.

HodgeTwins Family: Once, the Hodge Twins posted a video “Black Lives Matter Is a Leftist Lie” in June 2020 on Twitter. They mocked upon this movement saying” All lives matter.” Adding to it the other twin said, “black men, black Americans. I’m not African-American, I’m a black American. I was never born in Africa.”

They said that they won’t support this movement stating, “the whole narrative that police officers are hunting down black men on the daily was built on a lie. That Black Lives Matter organization is just to keep black folks upset because the Democrats want you to vote for the Democrats. Yeah, that’s the whole point of this organization is to keep black people pissed off so they can keep you enslaved mentally like you need them because they’re supposed to be you all are saviors.”

HodgeTwins Family: The twins live next to each other. They are married for about 16 years. Keith Hodge married to Elizabeth in May 2000. They have three children whereas his twin Kevin Hodge has four children. They both take utmost care of their children as they both themselves are health conscious. They try to have an impact on their children and help them set the goal for a healthy life.

The twins are certified trainers. They are certified by International Sports Sciences Association. The twins have a similar taste in food like barbecue, pizza, chicken and biscuits. Keith Hodge has a more serious approach towards everything than Kevin. Their mother passed away in September 2013.

HodgeTwins Family: You must not miss their videos if you are a fitness freak. See their latest video below.

Q: Who are Hodge Twins?

A: Kevin Hodge and Keith Hodge.

Q: When did the Hodge Twins were born?

I hope this was helpful. That’s all about Hodgetwins family. Stay tuned to know more about your favorite celebrities!!!

What is Tristan Jass age? Read on to explore about the young basketball ace player Tristan Jass Age | Biography | 5 Amazing Facts worth knowing. CHECK OUT NOW!!

Believed To Be God Made Couple Keith and Iris Are Now Divorced; Amid Affairs?