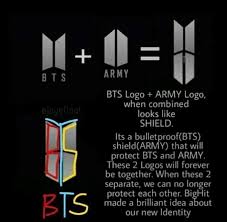 Many music bands are very famous by their bands and their helping hands where the BTS band comes first where the fans and followers of BTS also come in the same way where “BTS” is meant for donation and showering love whereby hearing it we can know that:)))

Let’s check out the article for BTS, where the live concert reason is overwhelming for fans!!!

South Korean boy band, BTS and its record label Big Hit Entertainment has donated US$1 million to the non-profit organization Black Lives Matter, to express its support for the Black Lives Matter movement. In a Twitter post, the official BTS account tweeted: “We stand against racial discrimination.

After K-pop titans stated “#black lives matter this week, declaring “we stand together” against racial discrimination, the group and its Korean record label are making a further commitment and donate up to one million dollars fo black lives matter where. The charity is also so happy for the reason and support. 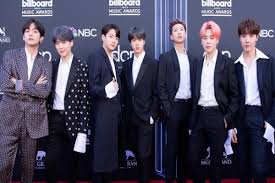 The donation was transferred earlier this week, with Black Lives Matter confirming receipt to Big Hit on Friday. BTS and Big Hit are not expected to comment on the donation; contacted by Variety, Kailee Scales, managing director for Black Lives Matter, said, “Black people all over the world are in pain at this moment from the trauma of centuries of oppression. We are moved by the generosity of BTS and allies all over the world who stand in solidarity in the fight for Black lives.”

On Sunday, BTS will appear as part of YouTube’s “Dear Class of 2020” commencement event alongside Beyoncé, President Barack Obama, and Michelle Obama. The event was rescheduled in observance of the memorial service celebrating the life of George Floyd being held in Raeford, N.C. on June 6. 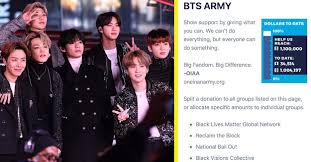 On Monday, June 1, The Weekend asked others to step up after detailing his donation of $500,000 towards racial-justice initiatives. “Urging everyone with big pockets to give and give big,” He followed up with a specific request to the industry of Universal Music Group, Sony Music, Warner Music, Spotify, and Apple Music. “To my fellow respected industry partners and execs—no one profits off of black music more than the labels and streaming services,” he wrote. “I urge you to go big and public with yours this week. It would mean the world to the community and me if you can join us.”In the K-pop scene, several artists have supported the movement both as individuals and groups.

It a good move from BTS where the band is known for its big heart now!!!!!