California wildfires: flames are almost licking a vehicle but car driver have succeed to escape himself from the fire

California is in danger of fire. The news has confronted a major disaster devastating forest of fire. Many forests are gripped by the fire and at least six people had died and more than thousands … 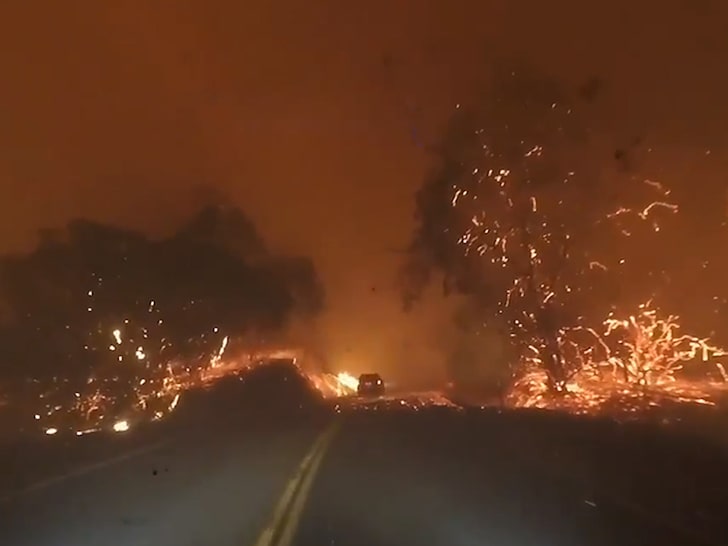 California is in danger of fire. The news has confronted a major disaster devastating forest of fire. Many forests are gripped by the fire and at least six people had died and more than thousands of people escape from the forest of fire. In fact, Donald Trump, the president declared disaster of a forest fire. 14,000 firefighters are doing their jobs. Now the incident was confronted on twitter that a driver was about to burn his car from the fire of California.

A person named Tyler day was posted a short video on twitter where a car driver going through California road and flame are almost licking the vehicle but the driver is too fast and evacuated his car from the fire. More than 20,000 acres have been burnt from the fire. The fire has reached the road and people are worried about traveling there. Around 560 flames burning the state, means California’s forest was burnt by the thunderstorm which reached the forest. A person who shared that driving video on twitter wrote a caption that “Dash Cam footage driving through the #hennessyfire along highway 128 and Steele canyon Rd on August 18, 2020”. He added a hashtag icon and wrote #LNUlightningcomplex. This video is really dangerous and watched this many are in shock.

President also worried about this and declared it a major disaster. Firefighters are doing their great job by saving the forest and many animals who are stuck there. And governor Newsom said during the DNC it undergoes the climate crisis. He twitted a video and captioned that ” survey the SCU lightning complex… This is now the third-largest wildfire in CA history. now this video is going viral on social media and people scared of this fire. you can see the images how brutally forest are burning and fire has reached on the road, dangerous for the people.

Governor requests international help to fight blazes. The driver was safely out of the danger zone. Go and watch that video and keep reading this page, we will let you know more related to this and others.

Kirsten Dunst, who played Mary Jane in Spider-Man, did not like the kiss she shared with Brad Pitt at young age.