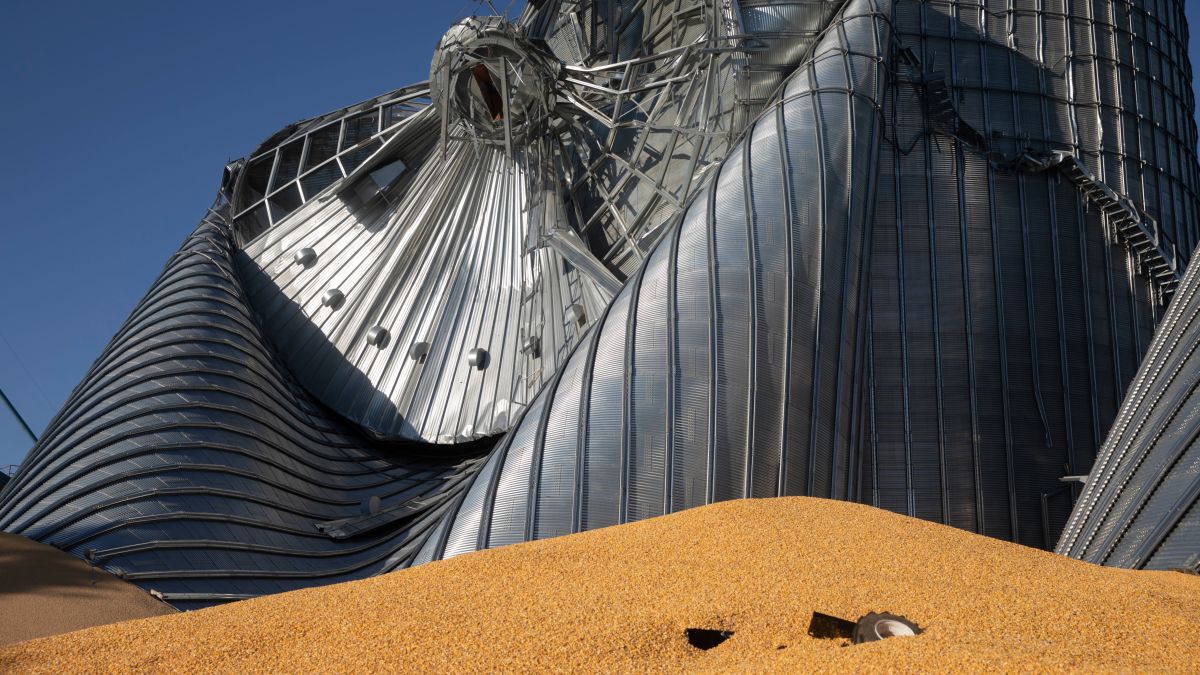 Earlier this week, the Midwest got absolutely pummeled by a powerful derecho. But the impacts were most severe in Iowa where winds cranked to 112 mph and torrential rain fell. Now, it’s becoming clear it was a disaster for farmers’ corn and soy fields that were flattened by the destructive storm.

The damage comes at a time when farmers won’t be able to replant. That could lead to massive losses across the region just a year after devastating floods that wiped out a number of farmers.

Derechos are a fast moving series of thunderstorms that can bring widespread destruction, and this week’s storm was an unfortunately all-too-real example. The winds killed at least two people, knocked over trees and power lines, and also damaged millions of acres of crops. The storm arrived as the region was slipping into drought.

“We were in desperate need of moisture here, since we were at 25% of normal rainfall for the month of July,” said Ted Hamer, a corn and soybean farmer in Traer, Iowa, on the northern edge of the storm. On Monday morning, meteorologist Ed Vallee of Empire Weather called Hamer and let him know he’d be getting that rainfall, but with a big price.

The derecho’s winds knocked over much of Hamer’s corn crop, and snapped some of it off from the ground. Corn is generally harvested in early October, meaning the fields were nowhere near ready.

“The problem is, the corn was not mature yet,” he said. “We’re still going to take it to the harvesting machine and it’s still going to get blended in with the corn that is mature, but that’s going to lead to all kinds of storage quality issues and quality with the grain.”

The corn that didn’t snap from the ground will also pose problems. Usually, corn can be harvested in multiple directions with a combine harvester. But since it’s now lying flat on its side, it may only be able to be harvested in one direction. That will slow down the harvest, costing Hamer more time and resources. Some of the bins Hamer uses to store grain were also torn apart by the ferocious winds, adding more headaches.

Iowa is home to a $10 billion agricultural industry, much of which is made up of corn and, to a lesser extent, soybeans. Before the derecho, the U.S. Department of Agriculture was expecting a record national corn crop this year of 15.3 billion bushels harvested from about 84 million acres, 18% of which was set to come from Iowa.

But the state’s agricultural industry has now suffered a severe blow: Iowa Governor Kim Reynolds estimated on Tuesday that up to 43% of the state’s cropland—an estimated 10 million acres—was hit by the derecho. Economists are still trying to determine what all of this will cost the state’s farm industry.

“It is still too early to put a value to the damages caused by the derecho in Iowa,” Alejandro Plastina, an Iowa State University economist, said in an email. “We have a big network of people trying to collect reports from all corners of the state to come up with an aggregate estimate.”

It’s not uncommon for wind storms to pass through Iowa, but this one was no ordinary occurrence. The U.S. hasn’t seen a derecho anywhere near this magnitude since late June 2012, when a severe one formed in the Midwest and ravaged some 700 miles of land in just 12 hours. They’re particularly scary because they’re difficult for meteorologists to forecast until just a few hours before they take affect, compared to the long lead time of hurricanes. That was the case with this storm, which was notable for a number of reasons.

“These storms do occur most summers, but the length of its path and the widespread gusts were very rare and very impactful with wind damage, which is why it has garnered so much attention,” said Vallee, the meteorologist who was in touch with Hamer.

It’s not clear if derechos will become stronger or more frequent due to the climate crisis. But it is likely that as the world warms, areas further north and south, closer to the poles will see more these storm events more often. They’re also far from the only climate concern for farmers. The floods last year were driven by extreme precipitation, which has become worse due the climate crisis. They were so severe, they caused nearly $11 billion in damage and scoured topsoil from fields that could lead to a decades-long recovery.