The internet is springing with love and affection for Bindi Irwin as she brings forward the lovely picture of a fan gift. The picture is that of a family portrait and the actual family … 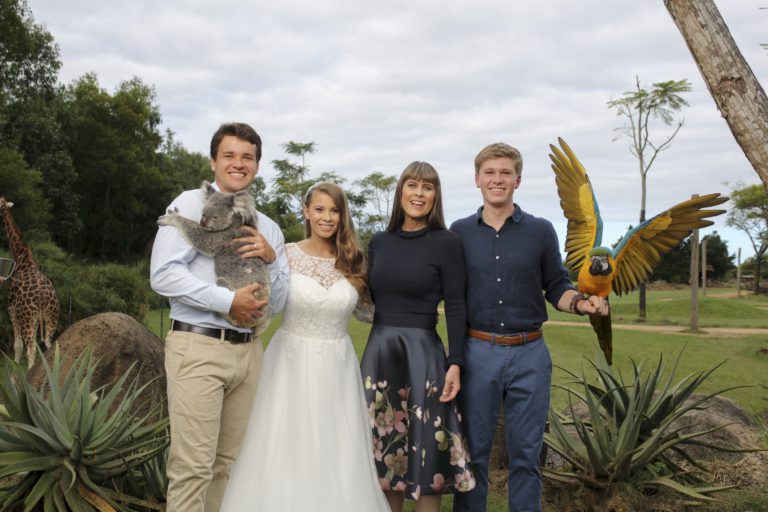 The internet is springing with love and affection for Bindi Irwin as she brings forward the lovely picture of a fan gift. The picture is that of a family portrait and the actual family holding it. It is a wedding gift to Irwin as she got married to Chandler Powell. The most important, and the rather interesting highlight of the portrait is that it includes her late father, Steve Irwin. The artist made sure to include the late wildlife traveler, since his demise in 2006. More so, Bindi was exceptionally close to her father, felt emotionally connected to him after she saw the art. She took it to her Instagram to show how grateful she was for it.

The two have shared a lovable bond and it was a hard time for the family to cope with that loss. Actually, the loss was hard to take for entire Australia, since he was such a great name. Bindi shared the picture on Instagram, but before that she’d already snapped the picture. She captioned it with a Thomas Campbell famous quote and it is receiving a positive response. One of the commentators also related to the loss and there were condolences as well as love for the family.

The artist who drew the portrait has also taken to the internet to explain the thoughtful idea. She says it took her more than 25 hours over a month to complete it. However, the actual notion was to paint the idea of Steve still being around the family. She had a thought and put it on a canvas. It was meant to symbolize how proud he’d have been of Bindi, Terry, and Robert. It seems almost as if he was there enjoying the beautiful wedlock with them.

The rather untimely demise of Steve Irwin sent shock waves across the nation. He died in 2006 after he was attacked by a stingray and the wounds pierced right through his heart. More so, he was declared deceased the moment they got him to the hospital. He was one of the greatest wildlife adventurers, also known as the Crocodile Hunter. Here’s a video of him and here’s a video of Bindi’s marriage.

The Seven Deadly Sins season 4 is releasing: to know more about the cast, story and releasing date keep reading

Priyanka and Nick finally opened about how both of them are coping up with the widespread pandemic!! Read to know more!!