China’s Tianwen-1 Sends Back The Pictures of Earth and Moon – Will the Mission be Successful? Is China Going to Share Information With NASA? Know More

Another probe joins the Mars mission this year. China’s Tianwen-1 is successfully in space, revolving around the trajectory to MARS. This is the second mission we are seeing this month. The third being NASA’s … 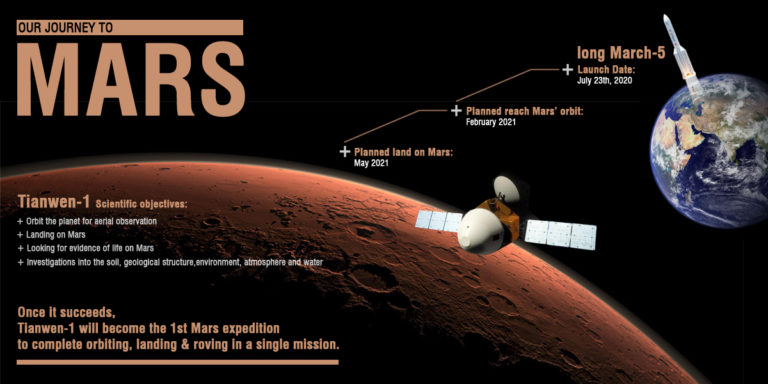 Another probe joins the Mars mission this year. China’s Tianwen-1 is successfully in space, revolving around the trajectory to MARS. This is the second mission we are seeing this month. The third being NASA’s Perseverence that will launch in the coming week. The first probe of the month was sent by the United Arab Emirates. Everyone is excited about the findings that the probes will bring back from the surface of another planet. China estimates, according to sources, dictate that the rover will bring back the information completely till 2030. However, it is a far fetched desire but we will have to wait till the rover lands successfully on the Red Planet.

Tianwen-1 to become a Milestone

In the Chinese history of sending probes to Mars, this will be a notable achievement. This is because previously when they tried using Russian technology, the rocket did not launch into space. The mission was a heartbreaking failure. However now, the probe is maintaining the right level of contact with the ground. Those at the China National Space Administration are positive about the mission.

The craft consists of an orbiter, lander, and rover and is about and weighs around 530 pounds (240 kg). The mission kickstarted on 23rd July with the probe landed on a Long March 5 Y-4 carrier rocket from China. On the 27th of July, it sent back a picture of crescent-shaped Earth and a distant Moon, visualizing that the ‘both were looking at each other’. The picture took the net by storm. Previously a Chinese satellite also sent the picture of a ‘blue looking’ Earth and the other side of the moon.

Findings and Facts by SpaceCraft

Perseverance – NASA’s spacecraft was also launched on July 30th. Currently, there are 3 missions to Mars. This is because Earth and the Red planet are in a favorable alignment. The Chinese probe will land on the planet in February. But before launching it will go through certain corrections, one of which will be done soon and other in October. The success of probes from the UAE and China also indicates that space is a space for all, and not just for the exploration of Euro-American teams. Chinese findings will help determine the surface and geological premises of the planet. It is a great step in Chinese history. Watch the launch here on YouTube.

Get to know everything about the secret marriage of Sean Penn and Leila George. Click here and get all the information in details.

Cody simpson has finally confessed his feelings towards best friend Miley Cyrus online..??? Read to know everything happening with this couple.