Sarah Urie is best known as the wife of singer and multi-instrumentalist, Brendon Urie who is a member of the band “Panic! at the Disco.” They have been married for ten years and are madly … 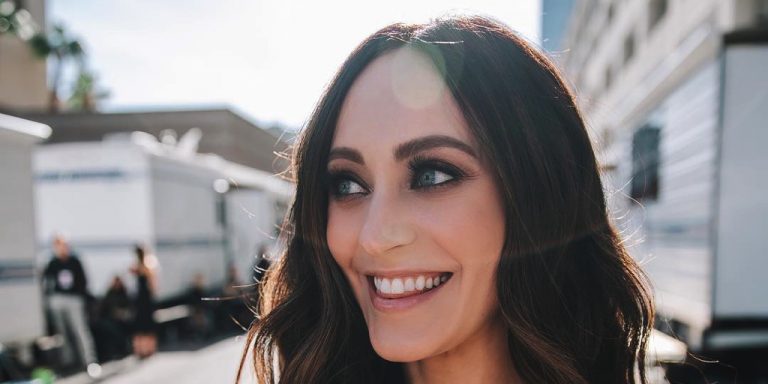 Sarah Urie is best known as the wife of singer and multi-instrumentalist, Brendon Urie who is a member of the band “Panic! at the Disco.” They have been married for ten years and are madly in love with each other. People know mostly about Brendon and his achievements throughout all these years but in this article let us give a look at Sarah’s life as her own.

Sarah was born Sarah Orzechowski on February 23, 1987, to father Edmund Robert Orzechowski and mother Mary Therese Orzechowski. Her father worked in DST Industries which is a vehicle manufacturing company. She has an older brother Steve Orzechowski and they both grew up in Detroit, Michigan.

Sarah completed her schooling at the Westland Lutheran High School in Detroit. Followed by that she also did a course in makeup artistry and esthetics from the Michigan College of Beauty.

As a child, she was very much passionate about modeling and acting. So Sarah moved from Detroit to Los Angeles to pursue her career in acting.

WHAT DOES SARAH DO FOR WORK?

In 2013, Sarah starred as “Crow Ninja” in an episode of the television series, Good Cops. But it seems like that did not work out for her.

However, she recognized her interest in skincare so she started working as a makeup artist for the famous cosmetics brand, Mac Cosmetics. Her knowledge about makeup proved to be useful.  Sarah soon was given a formal license to be a professional esthetician. Now she is a well-known self-proclaimed beauty enthusiast.

Sarah has a good social media base with 717K followers on Instagram. She often promotes some of her skincare products as well as shares useful information about organic skincare and haircare products. Being a social media personality, Sarah does most of her business online. She sells organic and aromatic soaps and body cleansers on Instagram. She once posted a photo of a gift that she had received from her friend and nail artist, Sarah Bland. She even promoted the product by claiming it to be free of chemicals and other cancer-inducing elements.

Sarah Urie, besides being a wonderful esthetician, is also a hearty philanthropist. She is mostly active on Twitter so as to inform her fans and followers about different charity programs that collect funds for philanthropic purposes.

IS IT A HAPPILY EVER AFTER WITH BRENDON?

Sarah Urie and Brendon’s love story was not an easy one. They first met during one of the Panic! at the Disco show in Detroit. It was love at first sight for Brendon. But too much of his disappointment, Sarah was in a relationship with another guy at that time. Nevertheless, he approached her and they hung out for a while.

About one and a half years later, Hayley Williams from Paramore became their cupid and saved Sarah and Brendon’s relationship. By then Sarah was single and she had felt a connection with Brendon so she decided to give it a chance.

Brendon tried to impress her at the show and it worked. They grew close from then and their relationship blossomed. He even wrote a few songs for her, the first one being “Sarah Smiles”. The couple announced their engagement in September 2011 and finally tied the knot on April 27th, 2013. The personal wedding function was held before their companions, relatives, and family members, in Malibu, California.

Sarah has been married to Brendon for over ten years and they are still smitten by each other. Although they have no children right now but are open to the idea of starting a family in the future.

Sarah has been extremely supportive of his husband especially when his fans comment against him or when there were rumors about him being gay. They take stands for each other whenever need which shows their love in abundance.

Sarah Urie is estimated to have a net worth of around $300,000. The main source of income for her is the business of hair and skincare products apart from the earnings as an esthetician.

Soon after their marriage, Brendon revealed in an interview that Sarah is also attracted to women and he is attracted to men. He said that he is basically Panssexual because for him a person’s personality matters and not the gender. so as long as he likes a person, men or women, he is okay with it.

What is Sarah Urie famous for?

Sarah Urie is the wife of Brendon Urie, a famous singer, and multi-instrumentalist, who is part of the band, ‘Panic! at the Disco. ‘ Sarah herself is a star on social media with more than 730,000 followers on her Instagram account. Sarah is also a Vine star and has over 100,000 followers on the video hosting service.

I mean, there are so many things that are involved, it’s just been a smorgasbord of craziness for 10 years… and that was really talking about me as a single guy — and now I’m married.” Urie said that, despite no longer being single, he still likes writing about partying life.

Brendon Urie is Still Married to Sarah Orzechowski After Identifying as Pansexual – Inside his Relationships. The sexuality of the Panic!

Who is Brendon Urie’s sister?

Riley Urie
Riley Urie, the little sister of Brendon Urie, is living with Brendon and Sarah after being given up by her parents.
Read more articles about: