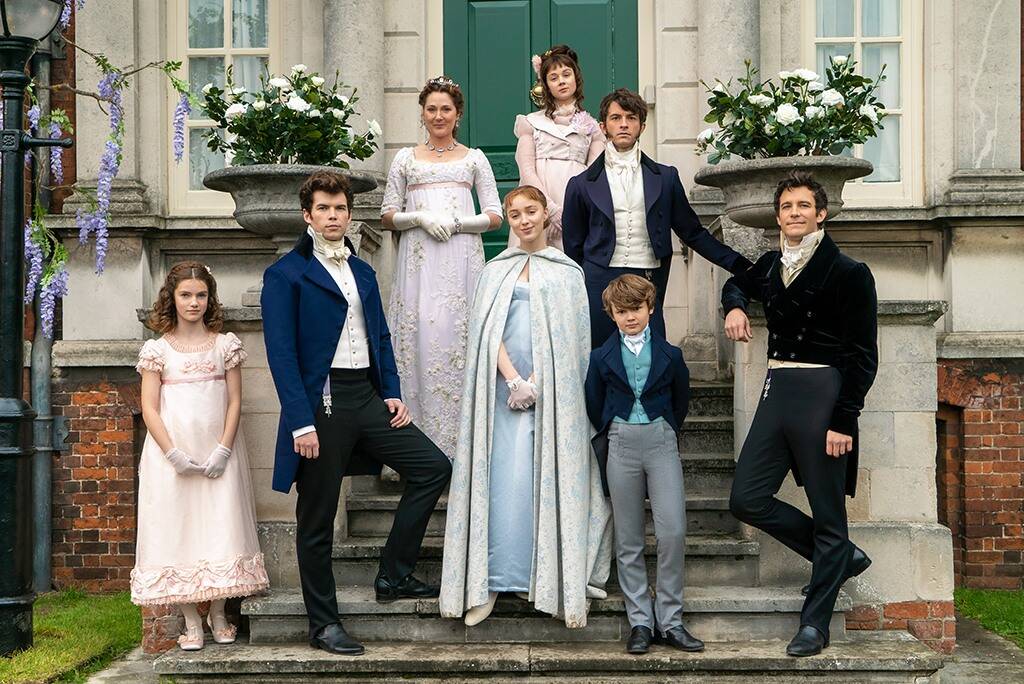 Bridgerton is a period drama set in Regency Era London which follows the story of the Bridgerton family through the Social Season and it’s filled with love, lust, and betrayal. The Netflix original drama series created by Chris Van Dusen is based on the 8 book Bridgerton book series written by Julia Quinn.  Season 1 of the series was based on the book ‘The Duke and I’ which followed the story of Daphne.

The first season of Bridgerton was set to the backdrop of Daphne’s (Phoebe Dynevor) life. It showcased how it was difficult for her to find a suitor despite being exceptionally good looking and well mannered.

Season 1 sets the premise for a rather immersive world that follows the well-to-do Bridgerton family which includes a widow and her 8 alphabetically named children – Anthony, Benedict, Colin, Daphne, Eloise, Francesca, Gregory, and Hyacinth. As expected, Regency Era London has everything from Love and Betrayal to juicy gossips. There’s also a fake relationship – a rather sensational one, an unplanned pregnancy, a very dramatic deathbed vow, a duel, and a sassy and sarcastic narrator voiced by Dame Julie Andrews. One of the things that stands out about Bridgerton is how diverse the casting is. “We try to imagine the history and the world in the way we wanted to see it,” executive producer Betsy Beers told Entertainment Weekly.

Daphne struggles to find a suitable husband despite an endorsement from Queen Charlotte (played by Golda Rosheuvel). To make things easier, she makes a deal with her elder brother Anthony’s (played by Johnathan Bailey) friend Simon, the newly inherited Duke of Hastings, that they appear to be courting so that her value will rise in the merciless marriage market and keep the ton’s mothers off his back.

To no one’s surprise, Daphne and Simon fall for each other and after a rather scandalous make–out session in the garden are forced to marry each other for Daphne to withhold her dignity. Simon feels guilty about Daphne having to marry Simon, but she reassures him everything is alright. They then decide to celebrate their marriage with a very horny honeymoon. She finds out that Simon’s inability to have children isn’t physical like she should; it is rather a vow he gave his father that the Hastings bloodline would die with him. After a wonderful turn of events, at the end of the season, Daphne gives birth to a beautiful boy with an apparently thrilled Simon by her side.

Crash Landing on You Season 2 confirmed!!

Anthony’s not so happy ending

As Anthony decides to make his relationship public, he finds the woman he loves with another man. She explains how life in the tons is not for her and that he should look for a wife who will be happy to share him with his Viscount duties. Anthony decides to marry but he gives up on love.

The Featheringotns did not exactly have the best of situations thrown at them after Patriarch Archibald (Ben Miller) gambles away the family’s fortunes. He manages to make it back by convincing boxer Will Mondrich (Martins Imhangbe) to throw the fight, betting on his opponent. However, in a vile turn of events, Archibald is murdered by the people he placed the bet with who steal the money back.

Featherston’s cousin Marina Thompson (Ruby Barker) gets similar bad news when she learns that the father of her unborn child, Sir George Crane, has died in battle. The messenger is George’s younger brother Phillip (Chris Fulton), who assures Marina that George did love her and planned to marry her — and then offers himself as a replacement. Marina initially refuses, pointing out — correctly — that she doesn’t even know Phillip. However, after Baroness Featherington (Polly Walker) explains how she willed herself into loving her late husband, Marina grudgingly accepts Phillip’s proposal and leaves with him.

From the Lady Whistledown reveal to all the other things that happened, we can all agree that it was a rather ‘buzzing’ season finale and it’s left many more questions unanswered. Lucky for us, Netflix announced Bridgerton Season 2 on January 21.

According to Netflix’s official announcement, Bridgerton Season 2 follows the eldest Bridgerton son, Anthony who decides he’s had enough of the bachelor life and is looking for love and marriage. Anthony intends to “dominate the social season”.  It points strongly to the fact that Bridgerton Season 2 will be based on the second book of the series called ‘The Viscount Who Loved Me’. Netflix’s announcement came in the form of a letter from the resident gossip journalist Lady Whistledown.

“Dear readers, The ton is abuzz with the latest gossip, and so it is my honor to impart to you: Bridgerton shall officially return for a second season. I do hope you have stored a bottle of ratafia for this delightful occasion. The incomparable cast of Bridgerton will return to production in the Spring of 2021. This author has been reliably informed that Lord Anthony Bridgerton intends to dominate Bridgerton Season 2. I will have my pen ready on any of his romantic activities.”

She continued “However gentle reader before you set the comment section alight with a request for more sordid details, know that I am disinclined to report the particulars at this time. Patience, after all, is a virtue.” 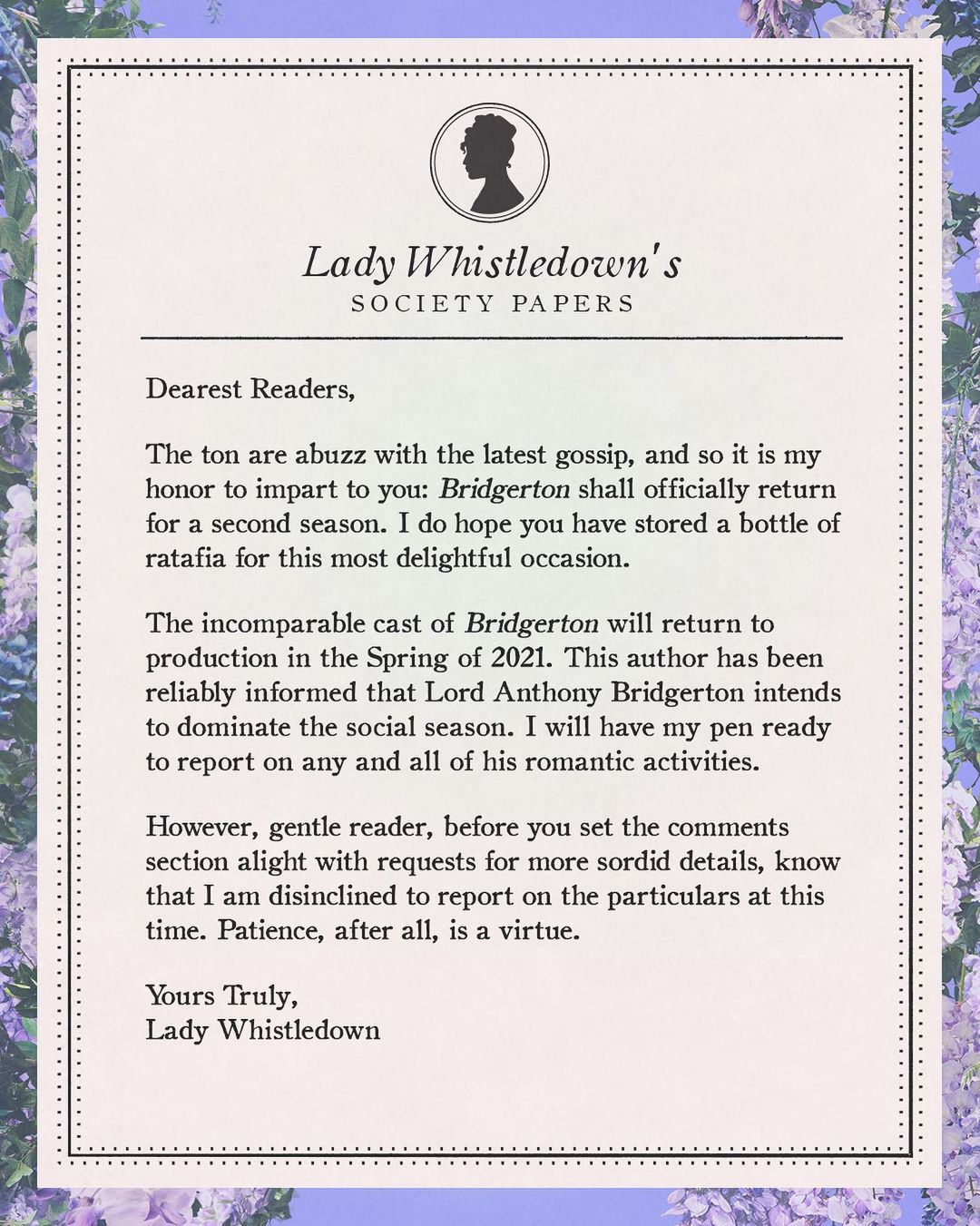 Fans of the book might be looking for a familiar name in Bridgerton Season 2 casting bill that is Kate Sheffield as she is the one to stir trouble in the bachelor paradise for Anthony. The fans as well as Johnathan himself are very fascinated and excited about the arrival of this character.  “Having read the second book, if Anthony gets to meet anyone half as brilliant as Kate Sheffield is, then he’s going to be a very lucky man,” Baily said in an interview with ETOnline.