Gadgetsblog
HomeEntertainmentIs Lori Harvey really pregnant? Steve Harvey is so pissed because of that. Know Her current Situation 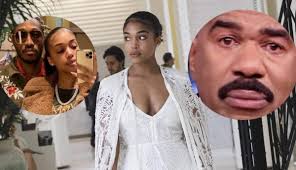 Is Lori Harvey really pregnant? Steve Harvey is so pissed because of that. Know Her current Situation

As everyone knows about Lori Harvey and The Future rapper’s affair, though their relationship hasn’t been confirmed yet by themselves, their public appearance together tells us a lot about their relationship. Recently the main information that has been in headlines was the news of Lori Harvey being pregnant with Future’s baby, and fans are going just crazy over it. However, there has not been any revelation yet related to the news by themselves.

Why everyone thinks that?

Lori Harvey had recently posted a story of a sonogram with no caption or wrote up, which was judged to be hers, but as her elder sister Morgan Hawthorn is also pregnant with her second child, one just can’t determine for who that particular sonogram belong to. But as per the news, it has also been noticed when Lori was spotted at the rapper’s 36th birthday party. She didn’t have any alcohol. In fact, it was maintaining a safe distance from it and also preferring only water at the party. But still, the official revelation is pending from their’s sides, and these are just judgments.

What does Steve Harvey think?

In this whole news, it has also been informed that Future is already a father to many children out there and if Lori Harvey is really pregnant that it is going to be his 11th child. Also, in a very much older conversation with her mom on social media, it was made pretty clear from mom’s side that she doesn’t like Lori’s involvement with Rappers or Athletes. And as per Steve Harve, he hasn’t said a single word about both and has kept his mouth shut every time topic of Lori Harvey and Future comes in front of him.