A man dies in a Aquatic park in support pipe: keep reading to get to know what happened to him

The news has come across the world that one man dies in the support pipe in US states. The police gave all the information about him that what happened to him and how this incident … 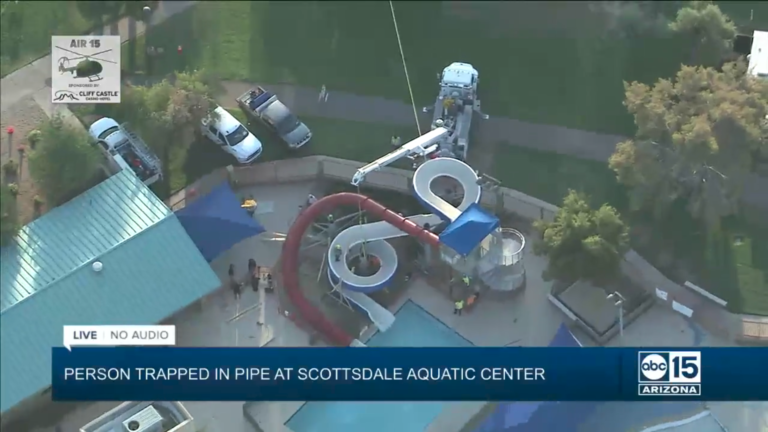 The news has come across the world that one man dies in the support pipe in US states. The police gave all the information about him that what happened to him and how this incident occurred? The big question is that how can a man die in the support pipe. And no one noticed this.

Where did this happen and to whom?

On Monday at Eldorado Aquatic Park in Scottsdale, in America,  Arizona emergency crew found a dead body of a man. The Eldorado Aquatic park is a water park. Many people go there for enjoyment and holidays. Till now nobody heard this kind of news. But this is shocking for everyone that how can man stuck in a pipe. There are swimming pools in the water park and people go there for swimming. Till now there was no risk and no such news. Well, the police didn’t find anything about the man. It’s unknown for everyone, no one knows who was the man. It is not confirmed yet that if the man was a worker or an outsider.

The Maricopa County medical examiner is finding how this man dies in the pipe. This incident came out between 12:30-1:00 a.m. by a police officer, the Scottsdale police officer was going for a watch over in that area and suddenly he heard some sound for help and then he went there. After he went, he saw a man who was stuck in the pipes and shouting for help. The police officer wasn’t able to communicate with him and he called for an emergency crew. But at 2 p.m. he stopped giving them responses from the pipe. The crew lost him there and can’t rescue him alive. The emergency crew takes him out of the pipe after he pronounced dead in the morning.

Still, the officers weren’t able to find how the man stuck there and why he was alone there. Many questions have arrived by many people. And they literally asking the police. Now let’s see when the police officers will find out about the man.

Joe Jonas and Sophie Turner posts their first picture after the arrival of their daughter. Asks fans to wear masks!! Read to know the full story.