Gadgetsblog
HomeAnimeCells At Work Season 2 Is Coming Soon!!!!Do You Know Who Is Premiering This Time???? 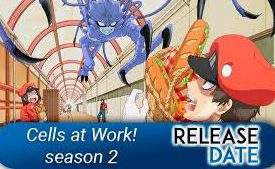 Cells At Work Season 2 Is Coming Soon!!!!Do You Know Who Is Premiering This Time????

One of the most awaited series where we can feel it in our own body which is nothing but Cells at work; anime series where we just loved it too much!!! Now an amazing series is coming towards us with a renewable one.

So, people like me inspire from it where we can see our blood cells fighting for us!!!! It makes us thrilled, surprised and what not??? Because in our body system trillions of cells work throughout the day where we get tired but not them:)))

So, one of that creative innovation series are Cells at work!!! So, now we are eagerly waiting for part 2 where we can feel great about our body once again. If anybody missed watching part one you can watch now as it is worth watchable…

Plot Of Cells At Work Season 2:

The story starts in the human body where the cells are performing their duties. Trillions of anthropomorphic cells do their duty to keep our bodies healthy. In this series, largely focuses on two such cells; a rookie red blood cell who often gets lost during deliveries and a white blood cell who fights against any germs that invade the body.

Cells at work is a Japanese manga series written by Akane Shimizu which was translated to English by anime tv series by David production where it released between July to September of 2018.The voice-over for RBC/erythrocyte by cherami Leigh and WBC/neutrophil by prilly kameez. Remaining cells are also having characters and roleplay where the lead role focuses on R.B.C and W.B.C because these two plays a vital role in the human body.

So, the amazing news is the new series are premiere from January 2021. Let’s enjoy by knowing some more useful information.