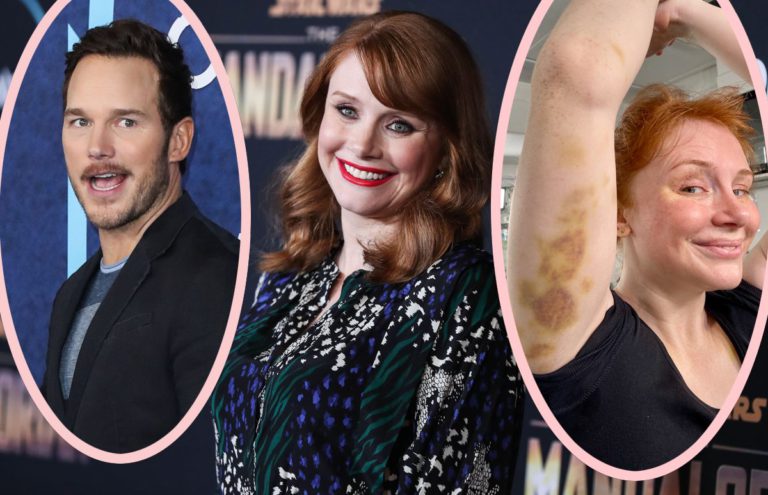 Bryce Dallas Howard is flaunting some significant bruises from her stunt work. The entertainer, posted on Twitter on Thursday sharing some enormous wounds she’s created from her stunt shot at the “Jurassic Park: Dominion” set.

The photographs came after “Jurassic” co-star Chris Pratt, urged her to share her fight wounds. He wrote,  “Show them the pictures of the bruises!!! (She got some crazy sick bruises from doing stunt work) Show them!!!”

After the encouragement, Bryce Dallas Howard posted her bruise photographs earning lots and lots of applause from the audience. “Raise your hands if you’re happy to be doing stunts again!!” she captioned the post photos. In the photos, you can also see her showing off her make-up free look and smiling, even though the bruises looked painful. She showed in the photos how both of her arms and one leg got badly hurt while performing her own stunts for the movie.

Raise your hands if you’re happy to be doing stunts again!! https://t.co/Rq1rtH05QH pic.twitter.com/n6IMR2X0ov

Reaction to the photos:

After her post, many fans called her brave and appreciated her hard work for the movie.  In return, her followers started sharing their own pride bruises they got while doing some brave works. But some people also said that celebrities just show of their little bruises, while these kinds of bruises are normal for many hard-working laborers all over the world.

‘Jurassic World: Dominion’ is the new installment of the dinosaurs adventure franchise. It is set to release on June 11, 2021. The shoot is already 2 weeks in, and Universal said that the progress of the movie is going great. However, a few days ago there was news that there might be some positive coronavirus cases among the group. “Any reports showing that Jurassic World: Dominion has ended creation are completely false,” a representative affirmed.