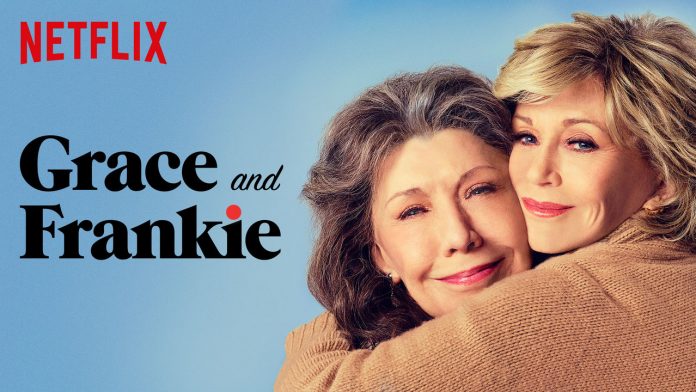 Well, this is sad for the fans of Grace and Frankie as this is going to be the last season. But this season is going to be a blast of fun. Unlike other seasons of Grace and Frankie, this season in the series contains 16 episodes. The production of the new season has been halted due to the pandemic. The cast and crew contain 340 members. But the leads of this series are Lily Tomlin as Frankie and Jane Fonda as Grace.

Grace and Frankie is a great comedy television series created by Marta Kauffman and Howard J. Morris for Netflix. All the 6 seasons in the series contain 13 episodes in it. It is the longest-running original series of Netflix. The first season was released on 8th May 2015, second on 6th May 2016, third on 24th March 2017, fourth on 19th January 2018, fifth on 18th January 2019, and the sixth on 15th January 2020. It was supposed that the production of the seventh season will start from March 2020 but due to COVID-19, it has been stopped. The series is full of hilarious comedy scenes. The series has a 91% score on the Average Rotten Tomatometer. The first season has received a 56% score on this meter while season two has received a 91% rating on Rotten Tomatoes. The other season scored a full 100% rating on Rotten Tomatoes.

Due to the pandemic, every work has been postponed. So, the production of Season 7 has also been halted since 12th March 2020. This season is going to be the last season with 16 episodes in it. All the other six seasons are full of fun and comedy. So, this last ending season is going to be a blast of laughter for the fans. And the expected time for the release of this Season 7 of Grace and Frankie will be January 2021. This is great news for the fans who are desperately waiting for the season.

The main leads of all seasons are Lily Tomlin as Frankie Bergstein and Jane Fonda as Grace Hanson. But the main cast from other seasons will be reprising their roles in Season 7. The cast of  Season 7 other than leads includes Sam Waterson as Sol Bergstein, Martin Sheen as Robert Hanson, Brooklyn Decker as Mallory Hanson, June Diane Raphael as Brianna Hanson, and Baron Vaughn as Nwabudike Bergstein.

Well, the plot of Season 7 has not been revealed yet. But usually, the story will start from where it ended in the last episode of Season 6 as expected. It is a series that focuses on two women- Grace, a retired cosmetic mogul, and Frankie, a hippie art teacher. Grace and Frankie’s mind go upside down when their husband reveals their love for each other. They both leave their wives to stay with each other. And the whole story is woven around how these women manage their lives and get unite to solve each other’s problems.