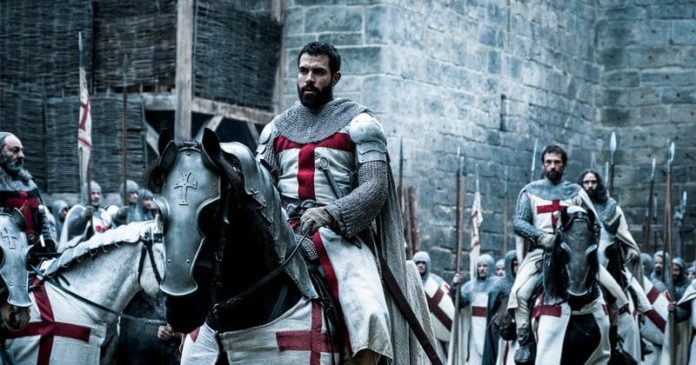 KNIGHTFALL & FALLEN? SEASON 3 CANCELLED? END OF KNIGHTS TEMPLAR? ALL YOU NEED TO KNOW!

Is this the end for the Knights Templar? Have the templars finally bent their knees to the negative critical reception from viewers? And is it getting renewed for a third season? We bet you have a lot on your mind.

So worry not. Here’s everything you need to know about the historical drama’s upcoming installments. If Any.

WHAT’S THIS SHOW ABOUT?

Knightfall is a historical fiction drama created by Don Handfield and Richard Rayner for the History channel.
With the rise in the power of nation-states, the authority of the Church is put to the test, and questions arise as to where the power of France should be held and how it should be used. This conflict of Church vs. State, faith and religion vs. the government and law, marks the beginning of what we perceive as modern History.

Although it is to be their final few years, this is perhaps the fascinating period of time associated with the Templars. Within this setting, we discover a brotherhood of warriors continuing to fight for what they believe in whilst their world slowly crumbles around them. Knightfall is a story of belief, loyalty, sacrifice, politics, love, revenge, and ultimately power.
The series is focused around ‘Landry du Lauzon’. Lauzon is the templar’s leader. A brave warrior discouraged by the Templars’ failures in the Holy Land..

Season 1 of Knightfall premiered on 6 December 2017 and concluded on 7 February 2018.
The first season introduces us to the events 15 years after the Third Crusade. At the time, Saracens overrun the Acre. The lost Grail turns up in France. So Lauzon takes up the responsibility of recovering it.

Lauzon’s temple master gets assassinated. So he takes up the mantle to lead the Templars of Paris. He does it while hiding his secret affair with Queen Joan. There are forces, however, at work to obtain the Grail for their own benefits. However, the soldiers of God fight till their last breath to protect the Holy relic.
Season One was unable to increase the ratings of the channel in 2017. The show received a mixed to negative critical reception from viewers. But it was enough to greenlight a Season 2.

Season 2 of Knightfall premiered on 25 March 2019 and concluded 13 May 2019 and consisted of a total of eight episodes.
The second season continued the same story, but with some major events. The Queen dies, the Grail gets destroyed, and a child is born. Now the King of France has declared the Knights Templar enemies of the state, and his son, Louis, returns home. Landry is no longer a Brother in the Templars and seeks reinstatement back into the Order.

One last chance is granted to Landry. But he has an uneasy burden with many of the men he called Brothers. Meanwhile, De Nogaret sets his plot in motion against the Pope.
Season 2 experienced a drop in viewership by 50% as compared to season 1. This has led to worries of a third season not being able to happen.

The series has earned universal criticism for being derivative, awkwardly paced, and a mediocre screenplay. However, there were positive reviews for the engaging performances of the cast and the visuals being referred to as impressive.

So, will Knightfall be canceled or renewed for season three on History? The ratings are way down, but this channel has so few scripted series, it’s difficult to tell what numbers they consider to be high enough for a renewal.
No other details, the release date of the series, or any trailer has been announced yet. All we can do is Hope. (Fingers Crossed)