Gadgetsblog
HomeTop TrendingHuge Hornets were spotted in the US! This is the first time it was spotted! Read below to know more. 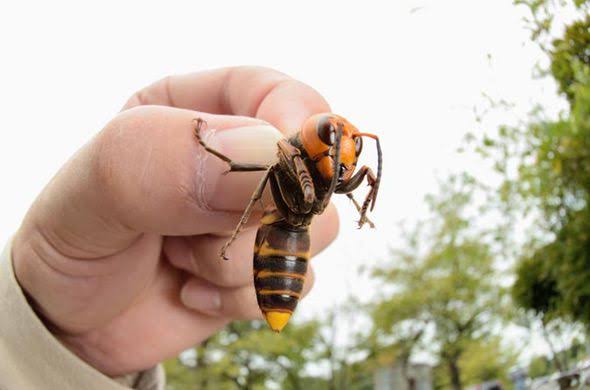 Huge Hornets were spotted in the US! This is the first time it was spotted! Read below to know more.

Hornets are not rare, but in the US they aren’t spotted often

Hornets aren’t good creatures at all. If you think that all animals and insects are precious no matter what, would beg to differ. If a huge wasp if to attack you, you will not hesitate to kill it. They’re creepy, they bite, they cause unconverted and don’t look good too. Looks like the US has never had these.

There are numerous reported cases of people coming in contact with this insect. Hornets are wasp-like insects, but bigger. They have a huge bee-like appearance but look like their something out of a cartoon.

Have you seen those movies where a big bee comes and bites you to death? That’s exactly what it looks like.

Some beekeepers around the US have informed that they found their flock of bees dead. Apparently, their heads were ripped off. This can be the doing of murder hornets only. With the bee population declining in such a rate, the wasp problem is looking like a real deal that needs to be taken care of soon.

These murder hornets were not in US before. they have no such experience with such things. Where did they come from? They’re Asian hornets, after all.

Some environment enthusiasts have no idea how these Asian hornets came to Washington state. They are known to be pretty destructive around the early summer season. They keep moving and hibernating, to look for sufficient protein. This will help in raising next year’s queen hornet.

The natural guess is that the queen hornets are looking for places to settle and form colonies in. The hornets like to attack bees and eat their larvae.

If you ever encounter one, do not get close. It can and will kill you. Research has found that these murder hornets can murder you if it bites you too many times. That’s why the name!