The Demon Girl next door is a Japanese four-panel manga parody series by Izumo Ito.  It was serialized in 2014 in Hobunsha’s seinen magazine known as Manga Time Kirara Carat. The manga has been volumed in six tankobon volumes. Later the manga was made into an animated series. 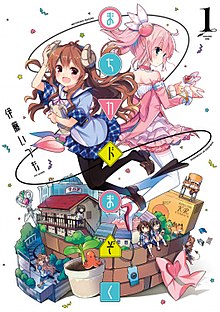 The plot of the manga starts when the main lead Yuko Yoshida wakes up one day only to find she has horns and a tail. Later she learns that she is the descendant of the Dark Clan. She is a demon girl and goes by the title “Shadow Mistress Yuko”, often shortened into “Shamiko”.  Yuko is the descendant of the Dark clan. The dark clan was cursed into poverty by the Light Clan. Her horns and tail sign for her to take her revenge on the light clan y defeating the town’s local magical girl named Momo Chiyoda. Momo Chiyoda is a  magical girl who attends Yuko’s high school. Despite allegedly being among the weakest among her fellow magical girls, she possesses great physical strength even without transforming, unlike Yuko.  She can transform into a Crisis Management form which slightly improves her abilities. she is capable of entering people’s dreams while sleeping. In this post will see how season 2 episode 6 was: “Vow Under the Setting Sun! The Path Forward for Demonkind”.With Sakura showing up, at last, the main goal of this episode is to explain how and why this phantom apparition of Momo’s big sister is chilling out in the dark depths of Shamiko’s subconscious mind.

In short, Sakura used the very last fragments of her energy to solder her soul with young Shamiko’s being, assuring that our protagonist would recover from the staggering consequences of her family’s curse. Shamika’s sinister health was caused by herself taking the burden of Ryoko’s share of the curse. However, she had her own, which explains an awful lot about how generally well-adjusted Shamiko’s younger sister is compared to the rest of her family.

Momo indeed has come to love Shamiko enough that she’d be willing to put off rescuing Sakura to ensure Shamiko’s safety. Hell, she’s willing to go full Darkside vassal for her adorably incompetent demon girlfriend. Momo decides on a new goal to make Yuko happy, choosing to help Yuko fulfill her promise to Sakura to help protect the town. This episode was rated 4.7 out of 5 stars.