Gadgetsblog
HomeAnimeTakemichi to lose yet another friend. Tokyo Revengers chapter 257

Takemichi to lose yet another friend. Tokyo Revengers chapter 257

Kakucho was brought into the light in chapter 257 of Tokyo Revengers. Fans were waiting for chapter 257 to elaborate upon Sanzu’s comment regarding the second time-leaper but the chapter took another unexpected turn. 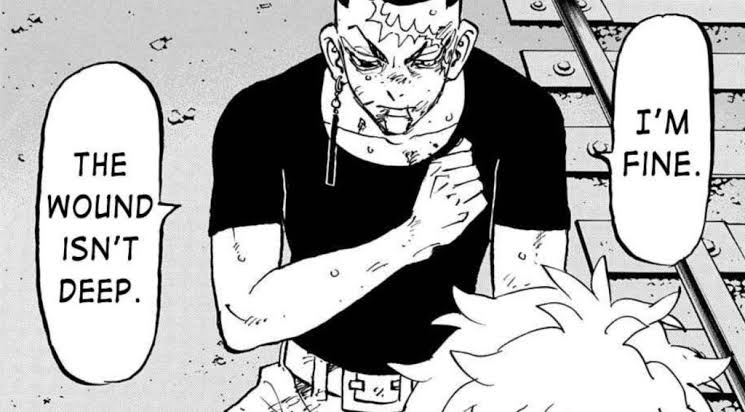 Kakucho sacrifices himself to stop the train. Chapter 257 continued with Takemichi and Kakucho’s fight to stop Sanzu from crushing everybody on the battlefield. The scene begins with Sanzu swinging his sword vigorously at Kakucho

Tokyo Revengers chapter 257 begins with Kakucho pointing out that considering the speed at which the train is going, the train will topple at the upcoming junction and hit the row of metal storage units, propagating the same disaster that Takemichi has witnessed in his vision. Despite his attempts, Takemichi is unable to locate the brakes and stop the train.

As we witnessed in the last chapter, Sanzu wounded Kakucho with his katana and started the train. Sanzu asks in this chapter to him, “By any chance, are you a time leaper too?” However, before Takemichi could even react to this question, Kakucho gives Sanzu a waist lock takedown and successfully throws him off the train. As Sanzu delights from his position on the ground that it is way too late to stop anything, Takemichi realized that the wound Kakucho received from Sanzu’s katana is far much deeper than it has previously seemed. They somehow manage to locate the brakes, and Kakucho urges Takemichi to get off the train, but the cry-baby hero Takemichi decides to stay on the train until he can save the others.

At first, Kakucho was unable to navigate the brakes, but he soon receives a vision of Izana. Izana reminds him that being reckless is who Kakucho is and encourages Kakucho to do his best.

Somehow Kakucho managed to stop the train. Takemichi seemed happy about the fact that the train has been stopped and he gets a pleasant smile on his face but not for too long. When Takemichi reaches the compartment in elation, he realized that Kakucho has passed away and his smile faded away.

The closing words of chapter 257 are “To save the lives of his friends, Kakucho takes his own life…”

The last chapter closed with a cliffhanger of how Takemichi faces Sanzu without Kakucho. At this point, Takemichi is broken and sad due to the loss of Kakucho. We might get to see the outburst of Takemichi and he could probably win the battle against Sanzu in Tokyo Revengers Chapter 258. Takemichi may not stop the fight until he has taken revenge for his friend’s death. Perhaps we will see Takemichi leaping again in Tokyo Revengers Chapter 258 after including Kakucho in the list of people he needs to save.