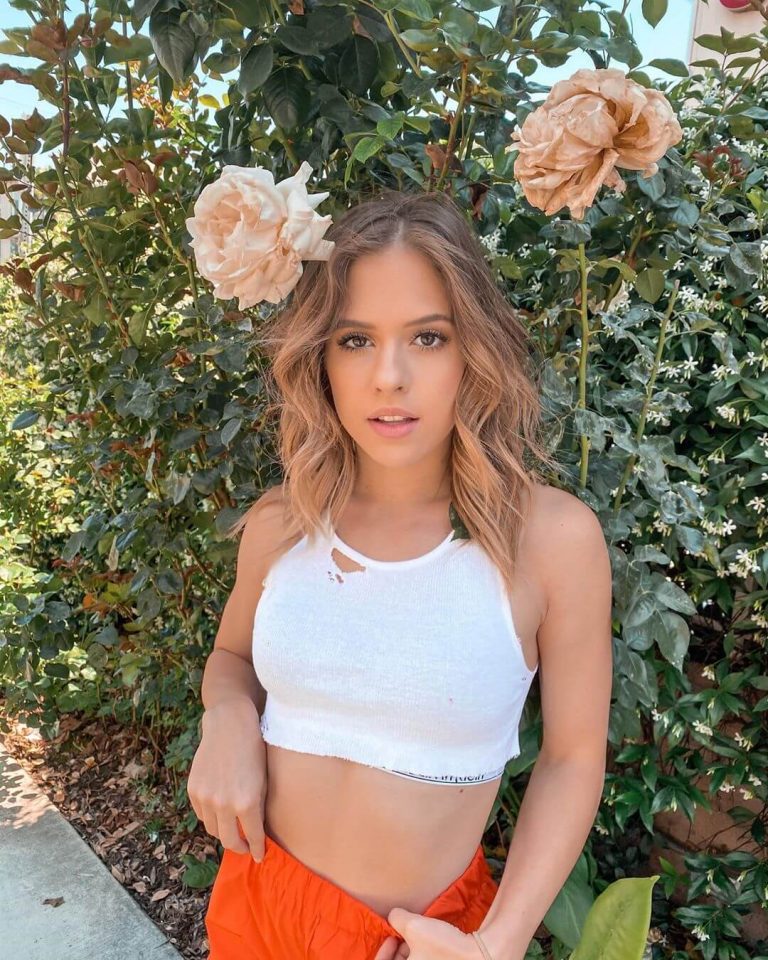 Kelianne Stankus is a famous Tik Tok star. She was born on 29 March 1996. She doesn’t have any content creator background indeed she’s a professional athlete. She has gained a lot of fame on Tik Tok in a very duration. Kelianne Stankus posted much of her dance videos during the quarantine period of 2020. She is one of the emerging artists. She is a part of Hype House.

She has now chosen the path of content creating as her career with a few of her friends. Born in March, Kelianne Stankus is an Aries by astrology. Kelly and Leanne are the parents of Kelianne Stankus after whom she was named. She is also referred to as ‘SleepyBear’ in a funny way by her close ones. Cody and Lucas, are her two siblings.

Kelianne Stankus is a professional gymnast. She’s a part of the team of US National Acrobatic Gymnastics. She is a winner of the gold medal in the year 2015. She won this first position in Freedom Cup. She has been into gymnast since her childhood. She is doing it for eleven years or so. She is looking forward to meeting Simone Biles who is a famous American Athlete.

Kelianne Stankus was a performer in The Ellen Show in the year 2015. She was part of the dance ground ‘The Acrobots’ back then. The Acrobats is often referred to as the “first-ever acrobatic hoverboard dance group.” The song this group performed was Baby by Justin Beiber. She competed in few competitions in the years 2015 and 2016.

BOBBY LEE WIFE: KHALYLA KUHN OR IS DATING SOMEONE ELSE? DARK SECRETS!!! THE TRUTH BEHIND THEIR RELATIONSHIP AND WHO IS KHALYLA KUHN AND THE MYSTERIES BEHIND HER!

Member of the Hype House

Kelianne Stankus is a member of the Hype House, which a content house. As she has chosen content creating as her profession, she made this decision to move along her journey. Kelianne’s friend Tayler Holder is a friend of Thomas Petrou who is in Hype House. Thomas also believed that it would be a great idea if both of them, Kelianne and Tayler join the Hype House.

Her Tik Tok journey- How quarantine played an important role?

Kelianne Stankus admits that the purpose of moving to Los Angeles in 2015 was her career. She wanted to have a career in dancing and acting. However, Tik Tok is a well-built platform for all artists to showcase their talent. The same is what happened with Kelianne; she made videos on Tik Tok and eventually liked doing it regularly. She said, “I started really like, focusing on TikTok four months ago when quarantine started happening.” She also liked the fact that she can add her gymnasts’ skills to this platform.

She has achieved a lot of fame to date. She has over 9.6 million followers on Tik Tok. She is one of the top artists on Tik Tok. She has collaborated with many renowned Tik Tok stars and is a core part of the community. Quarantine gave her an ample amount of time to post videos.

Her relationship with Zach Cox

Their relationship was revealed by Zach’s tweet in September 2019. However, it’s known that they both didn’t date for long enough and the relationship lasted only for few months. She also posted about her breakup on YouTube and expressed her love for Zach. The video was called “we broke up…so I did a thing.” She said in the video, “It was a shock to me, but I still wish him the best.” She also talked about giving up on some of the small things which she eventually did after going through the rough phase.

Her association with Tayler Holder

Tayler Holder and Kelianne Stankus are good friends. Tayler is also a Tik Tok Star. They were also seen kissing each other in one of the YouTube videos. They also came up with a video of a date that lasted for 24 hours. The video received an amazing response. All these videos made the fans contemplate the relationship between them. People thought that they are dating each other in real life too as they have a connection.

She was also asked once about her relationship with Tayler in an interview in the year 2020. The host asked her about their feelings towards each other to which she replied, “We’re best friends and I’m gonna keep it at that, There’s history, but now, we’re literally just best friends “.

A famous star with 440k followers on Tik Tok is the boyfriend of Kelianne Stankus. They both talked or met online for the first time. Their conversation was initiated through DM and they had their first date in May 2020. Tayler Holder also tweeted about their date.

Q: Who is Kelianne Stankus?

A: She is a famous Tik Tok star and a professional athlete.

Q: Who is Kelianne’s boyfriend?

A: She is dating Chase Mattson at present.

Q: What is Kelianne Stankus age?

I hope this was helpful. That’s all about Kelianne Stankus. Stay tuned to know more about your favorite personalities!!!

The Most Expensive Rare Fish in Animal Crossing How to Catch Rare Fish, Tweaks and Tricks